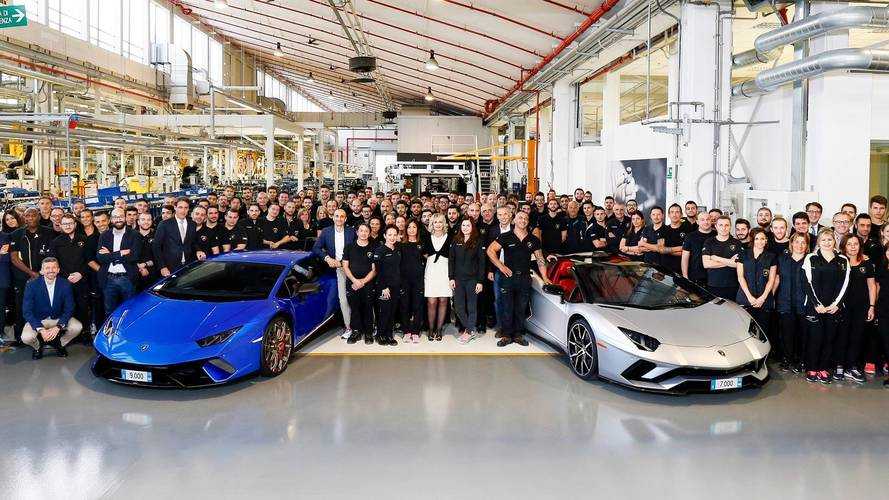 However, the Gallardo remains the most produced Lambo in history.

It's a busy old time down in Sant'Agata in northern Italy at the moment – Lamborghini is celebrating not one, but two important production milestones at the same time: the 9,000th Huracan and the 7,000th Aventador assembled.

Starting with the older model, the Aventador, which was introduced six years ago, chassis number 7,000 is an Aventador S Roadster. It is finished in Grigio Adamas silver metallic and is all set to be delivered to a customer in the United States. With 9,000 units produced in three years, the Huracan could soon become the brand’s most produced model in history, if it surpasses the 14,000 mark. That’s nearly the number of Gallardos assembled in the model’s epic 11-year lifespan.

The milestone Huracan is a Blue Nethuns car, which will be delivered to a customer in Dubai. The 9,000th Huracan comes less than five years after Lamborghini produced the 8,000th example of the supercar – a Grigio Lynx gray Huracan Spyder, exported to the United Kingdom.

The Italian manufacturer isn't happy posting those kinds of figures, however – it wants to double its production and sales once the Urus SUV debuts in early December. To prepare for the high-performance LM002 SUV successor, the company has significantly expanded its plant, where 7,000 units of the brand’s three-model range (Aventador, Huracan, and Urus) will be put together every year.

Production of the Urus should start next year, when Lamborghini expects to build no less than 1,000 units of the SUV, which will be a competitor for the likes of the Bentley Bentayga, Range Rover and Porsche Cayenne. A sportier threat will come from Ferrari's mooted SUV, which could arrive by 2020.

The Urus's production volume will be boosted to about 3,500 units in 2019 as demand picks up, and the exotic supercar maker estimates that the vehicle will account for half of its annual output.

Gallery: Urus spotted in Lamborghini factory with no clothes on

17 Photos
++Share
Hide press releaseShow press release
Sant’Agata Bolognese, 27 October 2017 – Just as it reaches its six year production anniversary, the Lamborghini Aventador achieves an important milestone in its history with 7,000 units produced. Chassis number 7,000 is an Aventador S Roadster, which was launched at the international auto show in Frankfurt in September. The jubilee model in Grigio Adamas rolled off the assembly line destined for the US American market.
The Lamborghini Huracán has also proved its commercial success with 9,000 units produced in just three years of production. The Blue Nethuns car, chassis number 9,000, is a Huracán Performante and will be delivered to a customer in Dubai.