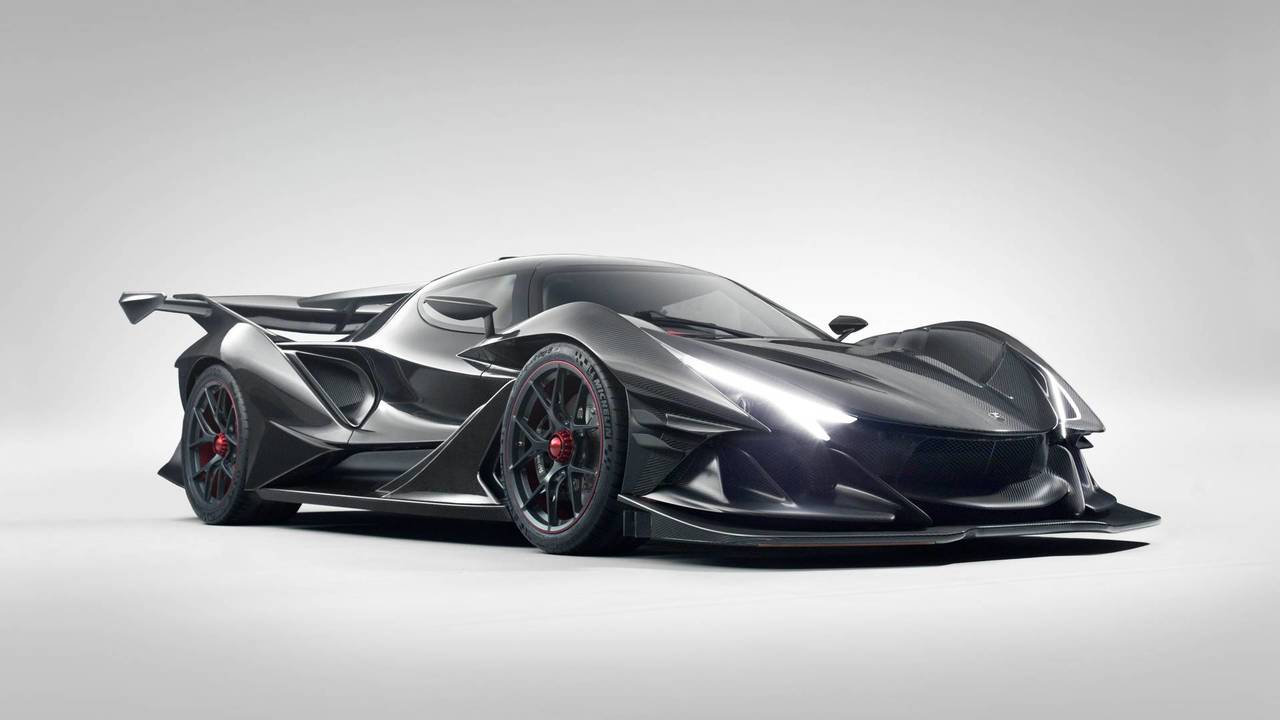 Apollo has revealed a new hypercar, the Intensa Emozione (IE for short), in Italy. The IE is aimed at drivers who crave a driving experience remincisient of the good ‘ol days, rather than the more plug in and play experiences of today’s hypercars.

Packing a naturally aspirated 6.3-litre V12 engine, the IE produces 780bhp and 560lb ft and will get itself to 62mph from rest in just 2.7 seconds and up to 207mph. Thanks to extensive use of carbon fibre in the body and chassis, the IE weighs in at just 1250kg with a 45:55 front/rear weight distribution. It is, unsurprisingly, chuffing quick.

Apollo’s new baby also features some pretty advanced aero: a huge front splitter, dive planes, channels along the bodywork, vents in the hood, flanks, and rear, an unholy large wing, and more. It all adds up to 1350kg of downforce (44.5/55.5 percent front/rear) that keeps it stuck to the ground during high speed corners and, well, high speed in general.

As expected from a modern hypercar, it has a carbonfibre monocoque chassis to keep weight down and strength up. The IE also uses a carbonfibre front and rear subframe to further cut kilos, and the whole tub/subframe set up weighs in at just 105kg. Roughtly the same as 105 bags of sugar.

As this is a hardcore car, race-inspired suspension is a must. As such, the IE uses F1-inspired double wishbone with full push-rod and rocker arm architecture on both the front and back, along with adjustable anti-roll bars. Adjustable Bilstein dampers finish the setup, though owners can have a bespoke setup to suit their needs should they choose to.

Should you wish to daily your IE you may be pleased to hear that you can fiddle with the car’s engine map to cope with damp weather – Wet, Sport, and Track modes are available at the prod of a button. The car’s traction control system features twelve levels of adjustment, too, so you can learn your car before going full hero and switching everything off.

The gears are changed by a six-speed Hewland sequential gearbox with a pneumatic change. As such, it can be a touch savage, Apollo says, but you do get that pneumatic ‘pshhh’ noise when you pull the paddle, so it’s kinda worth it. As well as having interchangeable ratios, it also requires the driver to engage first gear manually and let up an actual clutch before the auto ‘box takes over further up the ‘box. A concession to the old school experience Apollo seeks to ape, sure, but also a necessity of the gearbox.

Only 10 Apollo IEs will ever be built, each costing at least £2m (the bare carbon look shown here is optional, and worth it). However, buying one does grant you access to some cool stuff. Owners are able to compete in an Apollo Time Attack series, assist in the development of the IE itself, and get first dibs on upcoming Apollo products, like 2019’s Arrow…

Norman Choi, the man behind Apollo, had this to say about his new car: 'We felt that all the technological advancement and automation in today’s supercars took away the pure, raw emotional connection between driver and car. We wanted to build a car that would fill that void separating car and driver. So we built the Apollo IE.'

No part of the IE experience is ‘normal’. The seats are more cushions attached to the bare carbon tub, saving space and fixing the seating position, with the steering wheel and pedals moving to meet the driver. Each owner will have their measurements taken and a bespoke seat made for them.

The digital instrument cluster is designed to keep the driver’s eyes focused on the road, with cameras built in to the wing mirrors displaying what’s going on behind the car on screens flanking the main information screen in the centre console. As well as an aircon panel in the headlining, the car’s start button is a giant lever with ‘INIZIO’ written on it planted neatly on the ceiling.

You’d be hard pressed to miss the car’s otherworldly design. Nothing is there that needs not be there, and it aids the car’s fantastic aerodynamic properties. It was inspired by apex predators such as sharks and raptors, too. Which is presumably why it looks like it wants to eat you. Still, at least you’ll die happy.