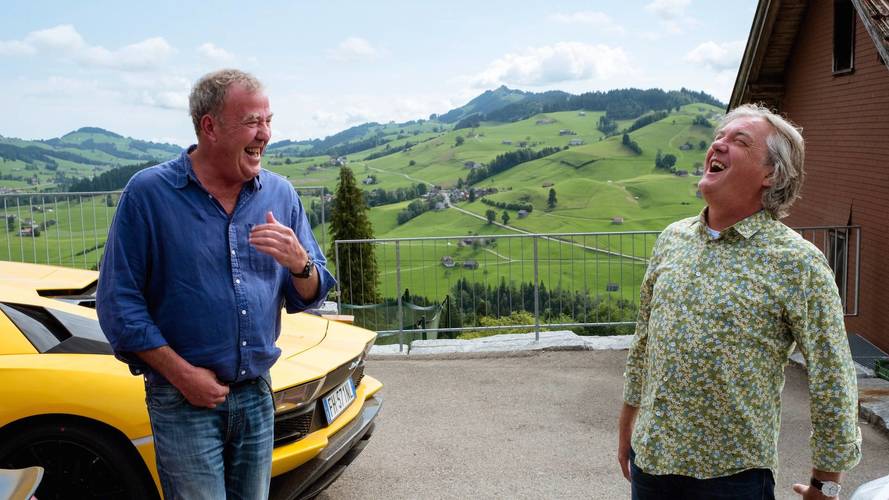 Supercars, off-roaders and plenty of nonsense.

It seems like season two of The Grand Tour is already well underway – so far Clarkson, Hammond and May have pitched their tent in a new permanent location, the Great Tew Estate, and an early trailer has given us an idea as to what we might expect when the show is revived later in the year. Now, new images provide ample evidence as to the kind of shenanigans the boys will be up to this season.

By way of The Grand Tour’s official Facebook page, we get our first look at Clarkson, Hammond, and May as they continue their travels in SUVs, supercars and off-road vehicles alike. The new images show supercars like the Lamborghini Aventador, off-roaders like the Ariel Nomad, and even a Nissan Pathfinder in a seemingly tricky situation.

The crew will reportedly make their way around the globe, stopping off in places like Colorado, New York City, Mozambique, Dubai and even the Swiss Alps. The new season will see Clarkson and crew travel to more locations than ever before. The many unique images from this season will even be published in a book, The Grand Tour Guide to the World, that will be published by Harper Collins on 31 October.

'It's clear that the most popular "Grand Tour" element of the show is when the chaps are roaming the globe on their big adventures and road trips, so that's what we're doing a lot more of for this series,' said Andy Wilman, executive producer of The Grand Tour. 'We'll keep the studio in one place, and given how accident prone they are at the minute, that can only be a good thing!'

As for the new season of The Grand Tour, there's been no official confirmation of a launch date, but expect to see it streaming on Amazon in November. Season one set a record for the largest premiere ever on Prime Video, as well as Amazon’s most downloaded show. Season two promises to be filled with even more automotive insanity.