All The Details About Ford's New Ecosport SUV 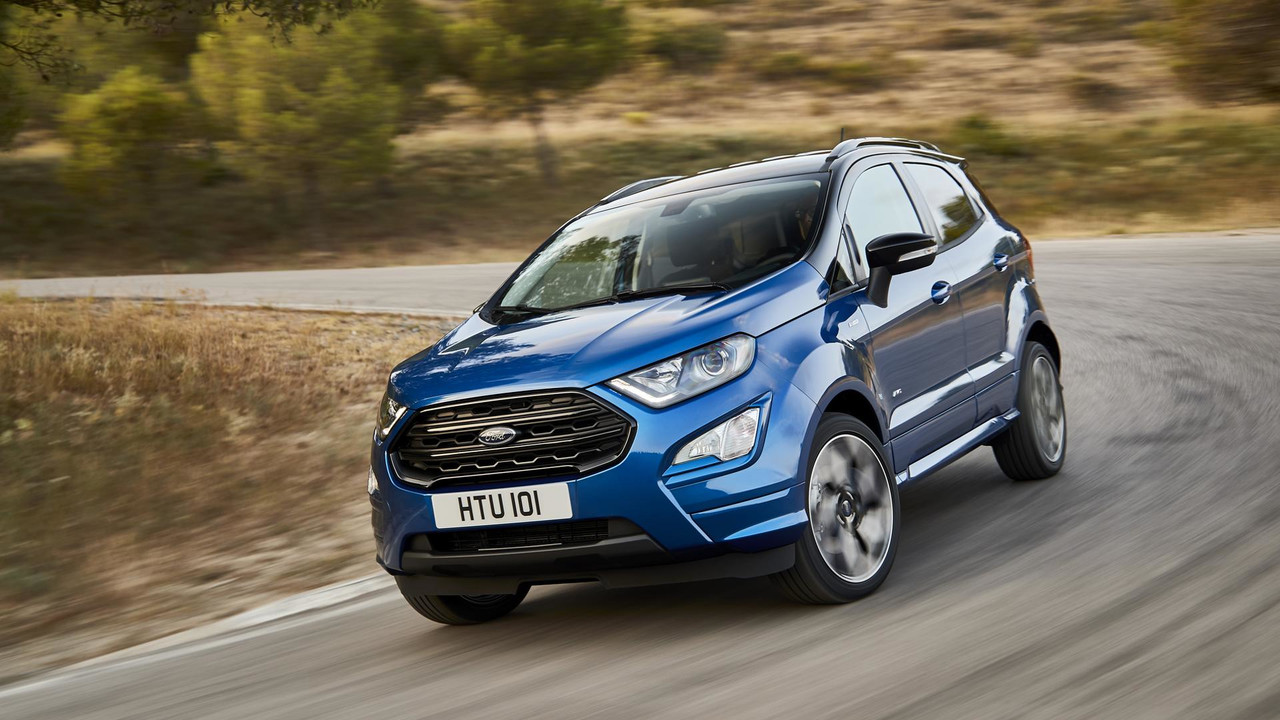 Ford has unveiled an updated version of its Ecosport SUV. Still looks funny.

After its unveiling at the Frankfurt Motor Show last week, Ford’s second-generation EcoSport is due to arrive in the UK later this year. Now competing in an even more crowded market than its predecessor faced, the new version promises more capability, updated styling and fresh tech.

Here’s everything you need to know about the Fiesta-based SUV.

So it’s just a Fiesta on stilts, right?

Sort of. Like the old EcoSport, the new model sits on similar underpinnings to its supermini sibling and a quick glance at the exterior is enough to tell you that it comes from the same stable.

However, the EcoSport gets a bulkier front end and more pronounced wheel arches, as well as a more upright, SUV-style rear. The side-hinged rear door has remained in situ, and while the boot-mounted spare wheel carrier is no longer a standard feature, it’s still available as an option.

Inside, though, the Fiesta influence is much more evident, although the EcoSport’s model-specific door cards and the off-road inspired grab handle seat give it a slightly different character.

It’s also more spacious, what with its 334-litre boot offering 42 litres more space than you’ll find in the Fiesta.

What’s it up against?

The EcoSport’s list of rivals seems to be growing all the time, with the Seat Arona, Kia Stonic and Hyundai Kona all joining the Renault Captur, Peugeot 2008 and Nissan Juke in the competition. There’s a new Citroen C3-based crossover on the way, too, and you can expect Skoda and VW to build their own versions of the Arona in the coming years.

What’s under the bonnet?

As before, Ford will market the EcoSport with its ever-popular 1-litre EcoBoost petrol engines, as well as offering 1.5-litre diesel power. At launch, you’ll have the choice of petrol engines with 123 or 138bhp, while the diesel units will be the 99bhp EcoBlue and a 123bhp variant that constitutes the sole four-wheel-drive option. In the middle of 2018, Ford will add a less potent 99bhp petrol engine and a more efficient, front-wheel-drive version of the 123bhp diesel.

Which goodies does it come with?

Standard specifications haven’t been confirmed, but Ford has said that LED daytime running lights, high-intensity headlights and 17- and 18-inch alloy wheels will all be available.

In the cabin, Ford’s SYNC 3 infotainment system is on offer, as well as a B&O Play sound system and a range of safety features.

Also on offer will be an ST-Line trim level (seen in these pictures), which will deliver sportier styling touches, 17-inch alloy wheels, a flat-bottomed steering wheel and part-leather seats.

How much will it cost?

Ford hasn’t yet announced official prices for the new EcoSport – it hasn’t even given us a proper on-sale date yet – but it’s likely to be priced similarly to the car it replaces. Expect to pay around £15-16,000 for a basic version.