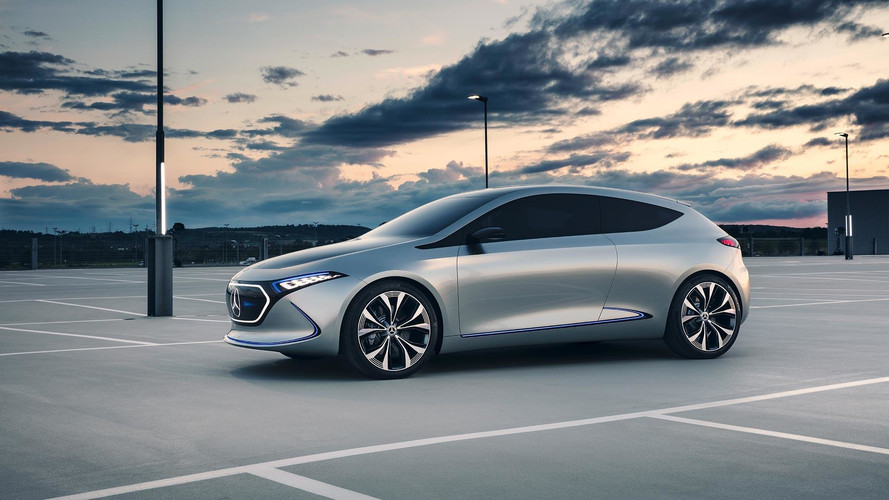 It’ll arrive in production form in 2020.

Mercedes-Benz is gunning for BMW’s i division with its newly-created EQ electric car sub-brand. It previewed its first model, the EQC SUV, at last year’s Paris Motor Show, and now it’s revealed another electric concept car at Frankfurt.

The EQA concept car will be the entry-level EQ model when it arrives in production form in 2020, with a 249-mile range and a price expected to take on BMW’s popular i3. Underpinned by a new electric vehicle platform, the EQA is powered by a flat battery pack with an electric motor at each axle. With a total power output of 268bhp and more than 369lb ft of torque, it’ll hit 62mph in “around 5.0 seconds.”

That’s pretty quick – and Mercedes-Benz is hyping up its driving dynamics, too. Drivers will be able to switch between ‘Sport’ and ‘Sport Plus’ drive modes, which will shift torque between the axles to provide differing driving characteristics. Essentially, it’s an electric car that should appeal to the enthusiastic driver.

"Our electric initiative is gathering pace: by 2022 Mercedes-Benz Cars will have launched more than 10 all-electric vehicles on the market,” said Mercedes-Benz chief, Dr Dieter Zetsche. “The Mercedes-Benz Concept EQA proves that we are serious about introducing electric mobility throughout the portfolio."

At 4,285mm in long and 1,180mm wide, the EQA concept is slightly shorter but wider than the current Mercedes-Benz A-Class. Its long wheelbase and electric drivetrain will be used to their advantage to maximise interior space, however. Not that there’s anything to see of the interior, for now – we’ll have to wait until the production model is revealed for that.

Exterior design details include a virtual front grille, which changes depending on the drive mode engaged. When ‘Sport’ is selected, the grille depicts a flaming wing. Yes, really. In "Sport Plus" mode, vertical struts in the style of a Panamericana radiator grille are displayed.