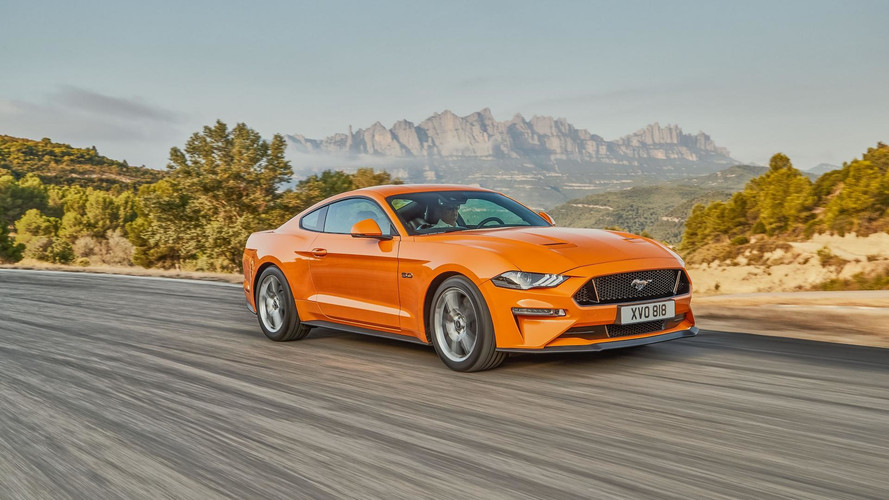 The V8 has more power than before.

Following in the wake of its American cousin, the European-spec Ford Mustang has been given a substantial facelift for 2018 – with the results set to be revealed in the metal at this week’s Frankfurt Motor Show.

The big news is a power boost for the V8 – up to 444bhp from 410bhp, while the 2.3-litre four-pot Ecoboost has been downgraded to 286bhp from 313bhp. This is because new emissions regulations call for a new gas particulate filter, says Ford. It’s just as quick as before, though, because of a new overboost function combined with a new 10-speed auto gearbox.

Ford’s electronic Line Lock feature, which applies the front brakes allowing drivers to spin up the rear wheels and perform controlled burnouts, is also available on the four-cylinder model for the first time.

While the standard suspension has been tweaked with revised dampers and thicker anti-roll bars, Ford is also offering its Magneride suspension as an option. Drivers can fiddle with the magnetorheological dampers via a series of new drive modes, along with a clever ‘Good Neighbour’ mode for night-time driving.

A number of cosmetic tweaks have also been made, including a more aggressive front end and a remodelled rear, accommodating four tailpipes for the V8. For the first time, a rear spoiler is available as an optional extra. Inside, there are more soft-touch plastics, while a new 12-inch screen replaces the conventional dials.

'Europe’s passion for [the] Mustang has proven even greater than we imagined – almost 30,000 Mustangs are already bringing one of the most iconic sights in motoring to the continent’s streets,” said Steven Armstrong, group vice president and president, Europe Middle East and Africa, Ford. “There are few cars on the road that can deliver such a combination of heritage, style and performance to such a wide audience. The new Ford Mustang offers the most compelling package yet.'

Prices and exact specifications are expected to be announced by the end of 2017, with deliveries beginning early in 2018.