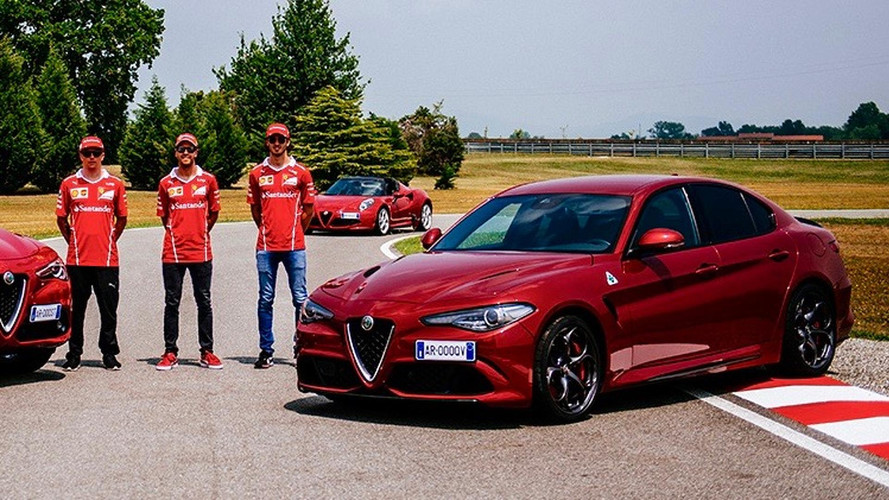 Vettel and Raikkonen ditch their Ferrari F1 cars to play with something else from Italy.

The Alfa Romeo Quadrifoglio is a very special car. It has claimed rave reviews from the world’s press, but what do Ferrari’s Formula 1 aces think?

Sebastian Vettel and Kimi Raikkonen – with five F1 titles between them – know a thing or two about driving. Joined by Ferrari reserve driver Antonio Giovinazzi and a trio of the super-saloon, they were let loose on Alfa Romeo’s proving ground in Italy.

Displaying some impressive car control, the drivers set to work melting the rear tyres. Considering that these chaps spend their time driving some of the fastest machines on earth, the Quadrifoglio impressed judging by their Cheshire cat grins.

Both Ferrari drivers recently signed new contracts that will see Vettel stay with Scuderia Ferrari for the next three seasons and Raikkonen at least until the end of 2018.

Links between Alfa Romeo and Ferrari are historic – a young Enzo Ferrari raced for Alfa Romeo before creating his own grand prix team. The first cars to wear the prancing horse were Alfa Romeos racing under the Ferrari banner.

The Alfa Romeo Giulia Quadrifoglio is powered by a twin-turbo 2.9-litre V6 engine, and 503bhp is channeled to the rear wheels via an eight-speed automatic transmission. Net result? 0-62mph in just 3.9 seconds and it will go on to a top speed of 192mph.

The Quadrifoglio announced its arrival last year by setting the Nürburgring lap record for saloon cars. However, Porsche soon put the Italians back in their place when it benchmarked the new Porsche Panamera Turbo. An impressive 7:38 minutes was the result – a second faster than the Alfa. This didn’t go down well in Italy and so they returned to Nürburg with an automatic Giulia Quadroifoglio for another attempt. The Alfa Romeo test driver than set an astonishing 7:32 time.