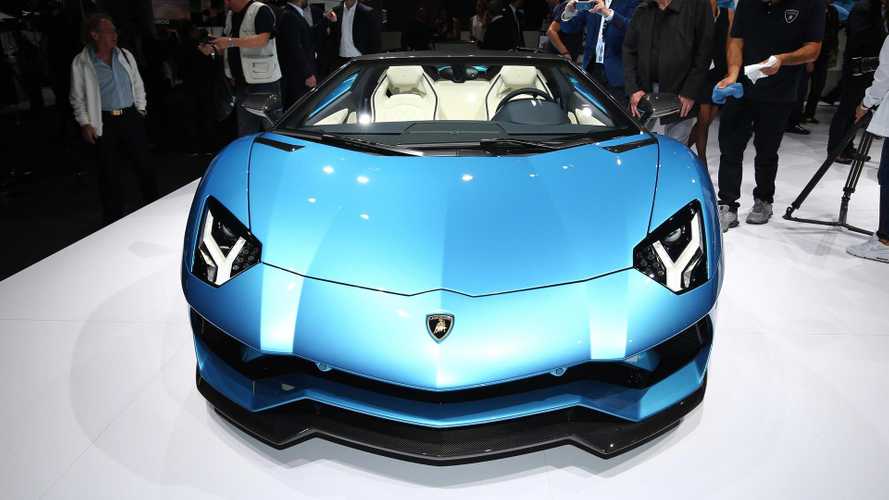 Prepare to feel the wind in your hair and the flies in your teeth.

Lamborghini has given a first glimpse of its new Aventador S Roadster, which the Italian former tractor manufacturer is set to officially reveal at the Frankfurt motor show.

The S Roadster manages eye-watering numbers thanks to a 6.5-litre V12 that pumps out 730bhp and 509lb ft torque, taking the car from 0-62mph in three seconds and on to a staggering top speed of 217mph.

The S Roadster gets a seven-speed robotised manual gearbox, carbon ceramic brakes as standard and rides on 20-inch wheels, which can be upgraded to 21-inch rims if signore would like. Apple CarPlay comes as standard too.

‘The new Aventador S Roadster sets new benchmarks in technology and performance on both road and track, with the roadster version adding a new dimension in driving enjoyment,’ says chairman and CEO Stefano Domenicali.

Lamborghini follows up ‘new benchmarks’ in its press release with ‘The Aventador S Roadster is the only mid-rear engine V12 super sports roadster’, so you have to imagine they’re not having to try too hard to beat their own standards in Sant’Agata, but we get the point. It’s a fast car, and may or not be faster than similar fast cars.

The Roadster version of the Aventador S gets some carbon-fibre touches around the engine, although a transparent cover option is available back there if you want to show off your mechanicals.

Going topless is an easy job, a small matter of removing two hard panels that weigh less than 6kg between them and stowing them in the boot, which is at the front of the car. The rear window drops electrically if you want to hear the noise of the V12 engine, but keep it in place and it acts as a useful wind shield when the roof is off.

There are five interior combinations available, mixing leather and Alcantara in a variety of colours that are intended to compliment the external colours. Lamborghini offers the option of further tailoring your car to suit via its Ad Personam programme. The Aventador S Roadster is available from launch in a special Ad Personam colour the Italian car maker calls ‘Blu Aegir’, ‘inspired by the peaceful turquoise ocean hiding an indomitable force beneath’.

The S Roadster enjoys both four-wheel drive and four-wheel steering for enhanced traction and steering ability. Fancy magnetic suspension and variable damping also help control the car on the move.

First deliveries of the Aventador S Roadster will take place in February 2018, and Lamborghini has recommended a UK price of £251,462 before sales taxes, etc. If you get in touch now, they’ll probably take cheques.

Have a look at the full set of pictures in the gallery below.