But the crash test organisation says manufacturers still need to offer more in terms of safety.

Euro NCAP is celebrating its 20th anniversary this year, and with the latest generation of Ford Fiesta getting a five-star rating the safety outfit is taking the opportunity to show how things have improved in its two decades of testing.

In September 1997 the Euro NCAP programme began with a series of tests – including the third-generation 1997 Ford Fiesta – that really challenged the car industry and forced it to raise standards.

Compare the two videos below:

‘When you compare the impact testing for the 1997 Ford Fiesta with 20 years later, you don’t have to be an expert to recognise a distinct progression in car safety,’ said Matthew Avery, director of research at Thatcham Research.

‘The dummy in the 1997 model endures a heavy head-strike against the B-pillar and there is serious intrusion in the side impact test too. The structure was just not stable. Today however, the 2018 Ford Fiesta offers far, far greater levels of protection to its occupants.’

The Euro NCAP team still has warnings to offer manufacturers, however. The new 2018 Ford Fiesta might have got a five-star rating in the test, it doesn’t come with autonomous emergency braking as standard, unlike some rivals which do.

Avery continued: ‘That one of the UK’s best-selling vehicles is a five-star Euro NCAP car is good news. However, its AEB system is only available as an option, which is a shame as fewer than five percent of car buyers take up additional safety packs. For this reason the Seat Ibiza remains our top safety choice of the superminis launched so far in 2017.’ 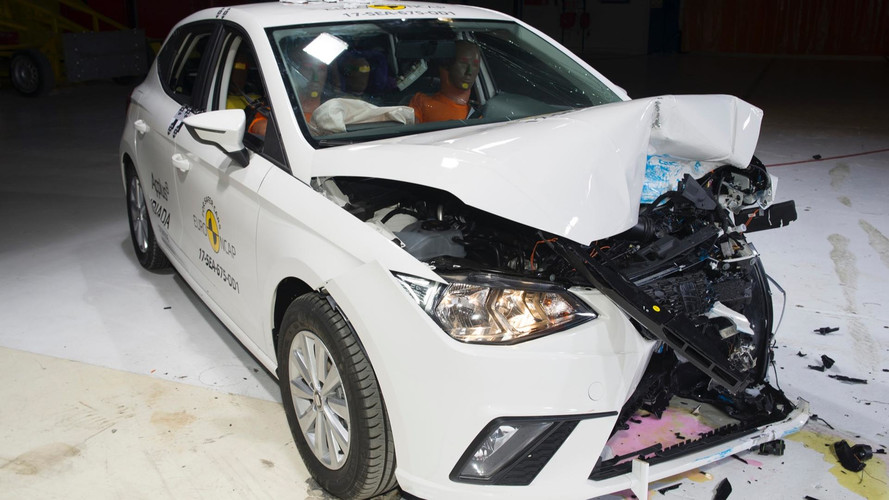 Euro NCAP has been busy in its birthday month, with three other superminis on test, which also come with the optional safety pack warning: