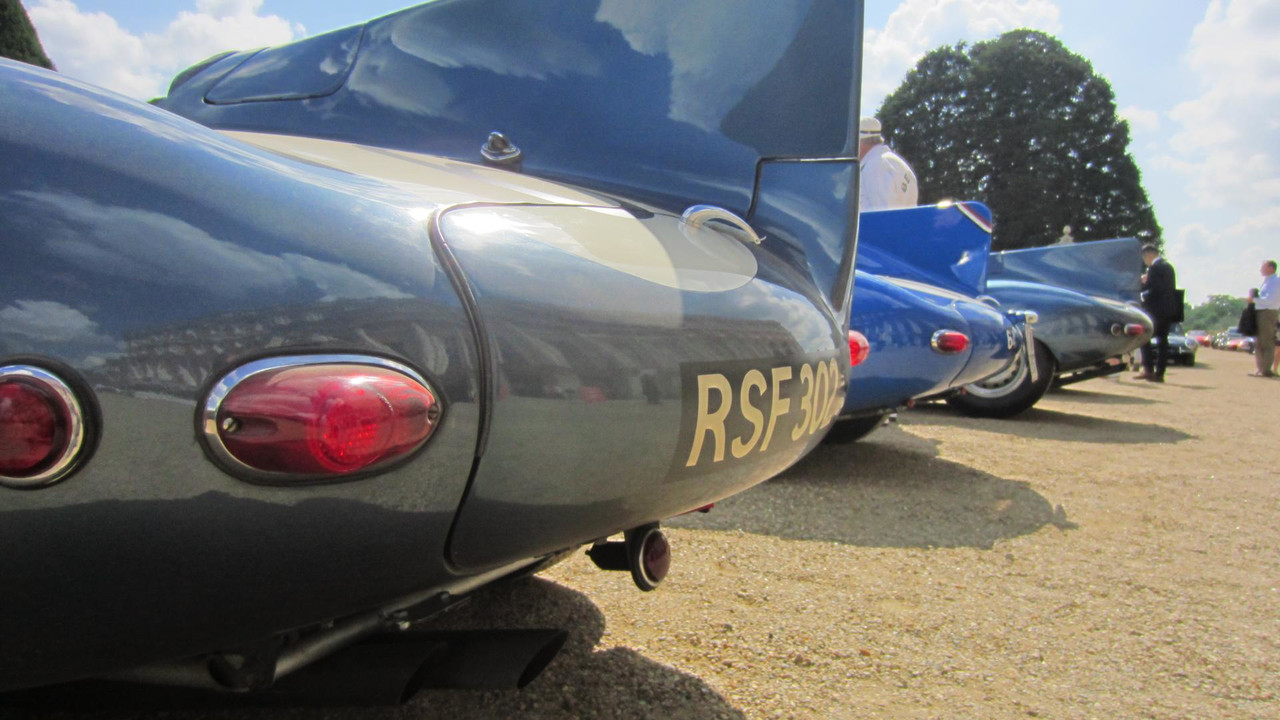 The Concours of Elegance is the upper class version of the PC World car park on a Saturday night.

Some of the rarest and most expensive cars in the world have gathered at Hampton Court Palace on the edge of west London – including a reunion of the winning Jaguar D-Types from the 1957 Le Mans race that took five of the top six positions – for the 2017 Concours of Elegance.

Cousin of the queen and noted motoring-aficionado Prince Michael of Kent was on hand to greet drivers as they arrived at the palace in clouds of unfiltered exhaust fug, and prime place was given in front of the building for the Jaguars, accompanied by 97-year-old former Jaguar test driver Norman Dewis, still able to hop in and out of the cockpit with relative ease.

Some of the pricey cars on display include a Ferrari 250MM worth £5.5m, a Siata 208S worth £0.8m, Maserati A6G 2000 Gran Sport Frua sold recently for £1.7m, a Lancia Astura Castagna Aerodinamico valued at £1.5m, Bugatti Type 54 worth around £3m, a McLaren P1 GTR that cost £2m and a 1963 Chevrolet Corvette Stingray worth nearly £400k that starred in the Elvis Presley movie Viva Las Vegas.

Highlights at the 2017 Concours of Elegance included:

A Bentley GTZ – one of nine examples of the Continental GT that was coach built by Italian firm Zagato.

Speaking of Zagato, there was also an example of last year's Aston Martin Vanquish Zagato coupes on hand, mere weeks after the announcement that the convertible and shooting brake versions of the car would also have limited production runs.

Another delightful little surprise hidden at the back of the Concours was the Project Vantage Concept, a 1998 concept car presented by Aston Martin ahead of putting the Vantage into production.

Some of the oldest cars at the Concours were the 1904 Mercedes 28/32 Simplex (left) and the 1896 Arnold Benz motor carriage (right). The Arnold was built in East Peckham, Kent, under licence from Karl Benz in Germany, and this very car is the first one in the UK to receive a speeding ticket late in 1896. Its maker, Walter Arnold, was caught driving at 400 percent of the then-speed limit, although admittedly it was 2mph and he was travelling at a decidedly subsonic 8mph.

Supercar fans will be delighted by the Lamborghini Countach on display – with its dinner table rear wing, fat tyres and obnoxious 1980s styling, modern fast cars have a lot to learn from the master.

While the 1942/46 Alfa Romeo 6C 2500 SS 'Trossi' Touring Coupé wins the prize for ridiculously long name, it's also clear to see the influence it's had on the more modern Alfa Romeo Giulia.

Our favourite among all of the pampered pooches was the 'Baillon barn find' Maserati A6G 2000, which makes its debut in the UK at Hampton Court. When every classic car going is a so-called magical barn find, this Maserati is a genuine example, made all the more special by the fact that it hasn't been touched aside from a little tinkering with the engine.

Of course, we could go on for hours more about the delightful machinery on show, but you can see for yourself either by clicking on the gallery below or visiting the 2017 Concours of Elegance yourself between 1-3 September.