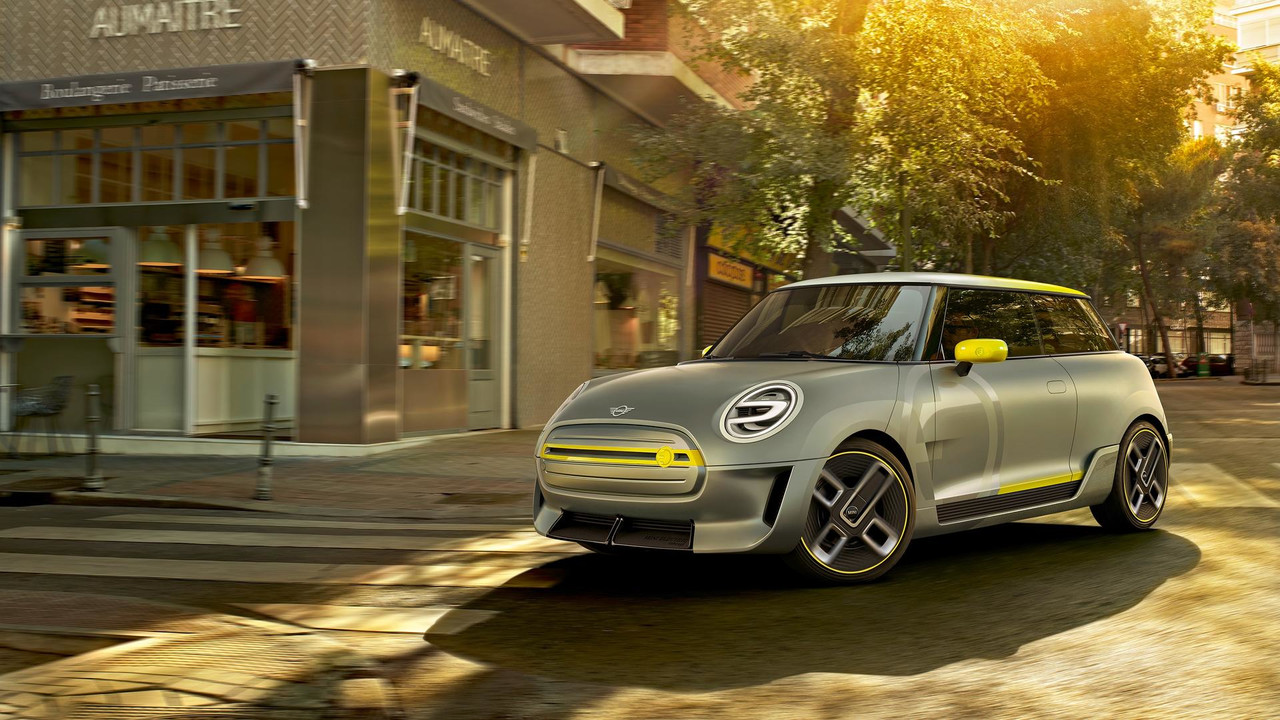 The future of Mini in more ways than one.

Meet the new Mini Electric Concept, our first look at the all-electric Mini that’s coming to showrooms from 2019. It will make its public debut at the Frankfurt Motor Show next month, to teaser show-goers as to how Mini plans to turn the hatch zero-emissions.

It’s distinctive, alright. It’s derived from today’s regular Oxford-built Mini Hatch (where this electric one will also be built), but the design team has been hard at work in streamlining it all, to make it as aerodynamically efficient as possible. The normal Mini perhaps isn’t the sleekest shape through the air: the intention with this one is to improve upon that, stretching the electric battery range accordingly.

So the familiar Mini grille has been entirely closed off – there’s no engine behind it, so no need to feed in cooling air through the vanes. It also gets a distinctive yellow feature line, a colour Mini calls Striking Yellow. Said hue is apparent in umpteen other places too – guess it’s going to be a signature colour of the new Mini EV. Even the roof transitions from matt grey to glossy Striking Yellow.

There’s a trick set of low-drag alloys, and the Mini Electric Concept also gets front wheel air curtains: air is channelled through the side of the bumper, around the front wheels and exits through a new channel pressed into the side door. Also note the lack of trad Mini wheelarch extensions, A-pillar motifs, even door handle recesses. The shape really is as smooth as can be: even the body colour is that slick-look matt grey.

Many of the aero addenda are made from lightweight moulded fibreglass, and some other elements are 3D-printed. That’s something which could open up future Minis to bespoke low-run customisation, muses the firm. It’s maybe one to watch.

At the rear, it’s again tidied up, with a clean lower diffuser, a rounded rear spoiler and even the ditching of the regular rear wiper. The rear of a car is an important aero area, which is why the Mini Electric Concept seems so clean and tidy here. There’s still room for a lovely set of Union Flag-inspired tail lamps though, pleasingly.

The surfaces are all taut and pure to create a minimalist impression, says the firm, “a whole new take on the concept of sportiness, reckons BMW Group Design senior vice president Adrian van Hooydonk. “Aerodynamics and lightweight design aren’t just important in the world of motor sport, they are also essential factors for maximising the electric range.” And “the striking accents and vivid contrasts give the exterior that distinctive Mini twist".

No details yet of the electric drivetrain itself, although we expect that to be related to the BMW i3, itself also just facelifted in time for the Frankfurt show. Mini also isn’t showing the car’s interior just yet: it remains to be seen whether it will be exposed at the show, or kept under wraps.

We’ll see more of the new Mini Electric Concept, and hear more of Mini’s plans for the future, at Frankfurt next month. In the meantime, soak up our first look at the EV Mini of tomorrow. It really will be here sooner than we know it…