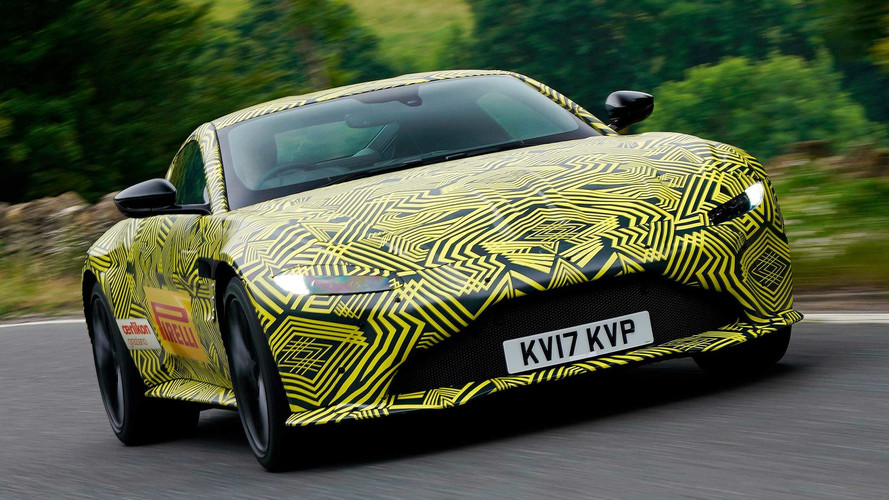 Images of the new Aston Martin Vantage wearing full camouflage livery have surfaced, ahead of its full debut later in 2017. The new model will be the second all-new Aston Martin to launch, following the 2016 launch of the DB11 GT supercar.

The new Vantage will be a sports car rival to the Porsche 911, sitting below the DB11 as the ‘entry-level’ Aston Martin. It will be powered by a V8 turbo engine sourced from Mercedes-AMG, likely a variation of the 4.0-litre motor due to launch in the DB11 V8 later in the summer.

It will use a front-engined, rear-wheel drive architecture related to the DB11 but, unlike the old V8 Vantage, there will be greater visual differentiation between the two cars. Judging by what we can see beneath the camouflage, the new Vantage is set to carry into production some of the styling cues from the DB10 James Bond car – the special Aston Martin built for Bond to drive in the film Spectre.

Even with the disguise, we can see the headlights look rather DB10, and the rear haunches look pretty pumped as well. Other elements link it to the DB11, such as those side wing gills, and there’s even a bit of Vulcan in the car’s aggressive underbody aero features.

Expect prices to start from around £100,000 for the base model, which will probably produce around 450bhp. It will feature an eight-speed paddleshift automatic, like the DB11 – and may in time also get that car’s turbo V12 engine, creating a follow-up to the V12 Vantage cult car. Those iconic quad bonnet grilles may yet return.

There’s a fair chance Aston Martin may choose the Frankfurt Motor Show in September to reveal the new DB10; if not, we’ll certainly see it by the LA Auto Show in December. Don’t be surprised if a few teasers emerge before then, either…