Less Than Two Minutes With An Abarth 131 Rally Car

Old, fast, and covered in Alitalia livery, the Abarth 131 rally car is something to be savoured.

The 2017 Goodwood Festival of Speed has been and gone, but while we were there the opportunity to drive a rally legend came up, you just can’t say no to that kind of thing.

Driving cars up Goodwood’s famous hill can be a mixed bag. 99% of the time you’ve never driven the car before, and you don’t really know the intricacies of the route. It’s a challenge, but one to be relished.

The car, a former works rally motor, has seen some action in its time. It’s been driven balls to the wall by some of the world’s greats, and now… me. So here’s the skinny. It’s got the best part of 240bhp, a five-speed manual gearbox, rear wheel drive, a set of brakes from an era when cars were designed to go quickly but not necessarily stop, and no handbrake at all. Any slight incline is enough to make it roll, so those dodgy brakes and an iron calf are the only things stopping you from giving the nearest other car/wall a little kiss. 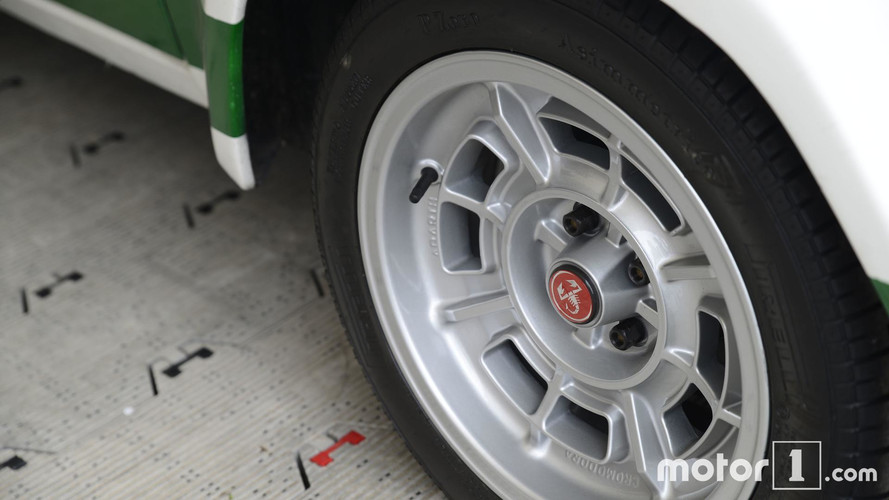 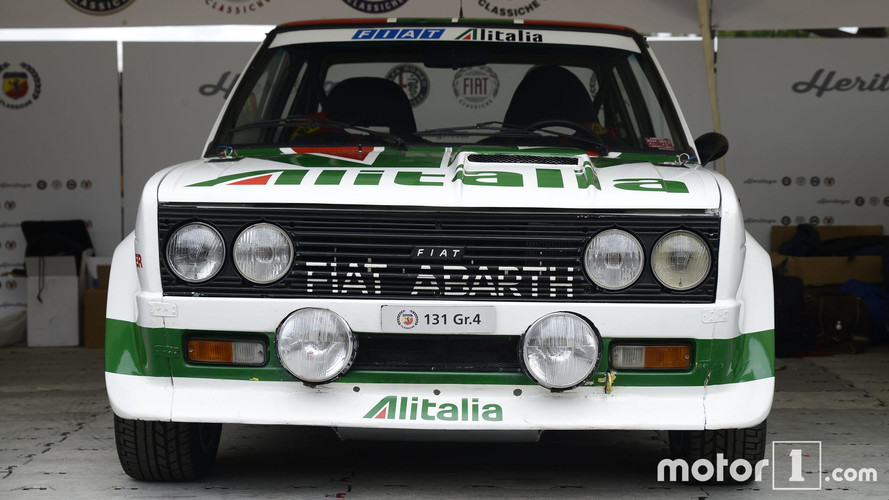 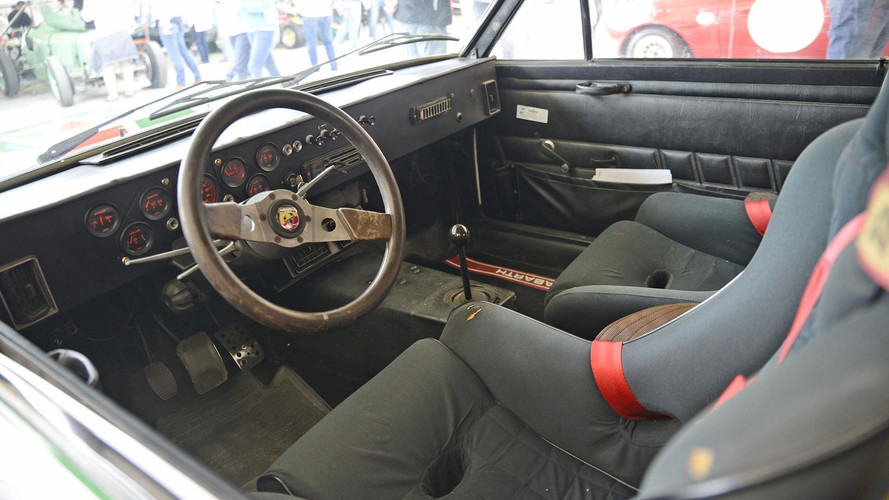 It’s a remarkably simple car to get your head around. Fiat’s tech in the 70’s wasn’t as old school as you’d expect. The gearbox, despite having a shift pattern offset by about 30 degrees clockwise, is easy to use. There’s no need to double declutch or anything like that, though you do need to give the lever a decent heft to get it in to gear. The clutch is light and easy to balance the Abarth on. If it weren’t a priceless rally car you could quite happily burble it around town.

And burble it does, its twin cam motor doesn’t rev especially high, only to 8,000rpm, but it sounds simply incredible. Goodwood was typically baking hot, and there’s no real way to cool the cabin – it’s a race car after all, air conditioning is a needless luxury in there. Driving a car up the hill may last a scant minute or two, but getting the car to the start line takes about an hour. You drive to a holding paddock, sit and wait, then slowly wend your way to the foot of the hill to sit in a delightful traffic jam of exotica. It gives you a bit of time to familiarise yourself with the car, but not so much you can do a full pelt run with it (unless you’re a superhuman, which I am not.).

Waiting for the start line, engine burbling away, eyes watching the bright Italian box controlled by a not-so-bright man, was nerve wracking. I was sweaty, pretty sure I was going to forget how to drive a car and simply wanted to get the motor to the top of the hill and back without incident. Then it was go time… 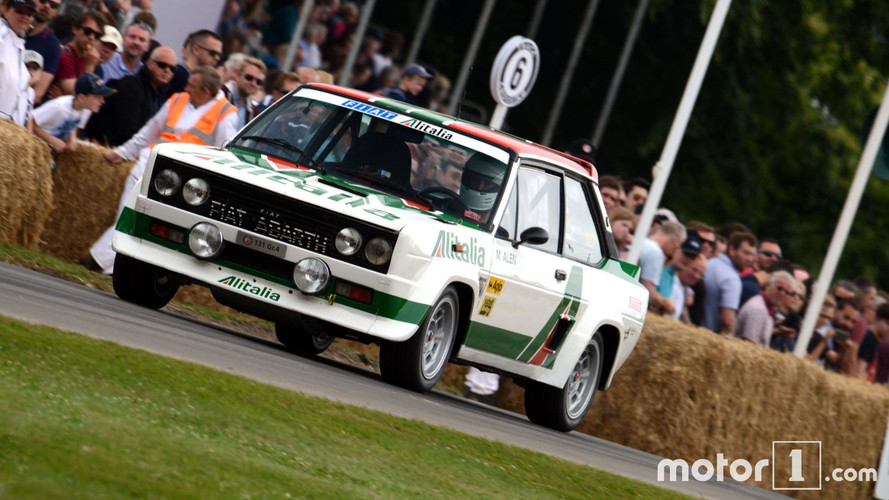 Clutch down, engage first, clutch up, gas down… go. Slowly. I didn’t stall, which was the main aim, but still there wasn’t much by way of drama. The noise that filled the cabin was a delight, a din of 1970’s rally noise.

Taking it steady was a good choice, as coming out of the first corner the rear end decided to let me know not to put the power down too early by stepping out just enough to make bits of me clench. On the straight it became very clear that the 131 ran out of revs fairly swiftly, and that I needed to gun it and make plenty of noise for the crowds. Coming up to the fearsome Molecombe corner - an off-camber bend that’s claimed more than a few over-enthusiastic drivers (including Sir Chris Hoy) - I pressed hard on the brakes to discover how little they did. This is a car designed for speed, not stopping, so you can forgive its wonky stoppers.

The steering is an old school delight – while the car’s moving at speed you can feel everything the front wheels are doing, adjust them ever so slightly and carry on up the hill. Approaching a corner in an old car can lead to some trepidation as older gearboxes aren’t often the easiest to use, but the Abarth was quick and easy to use in a pinch. 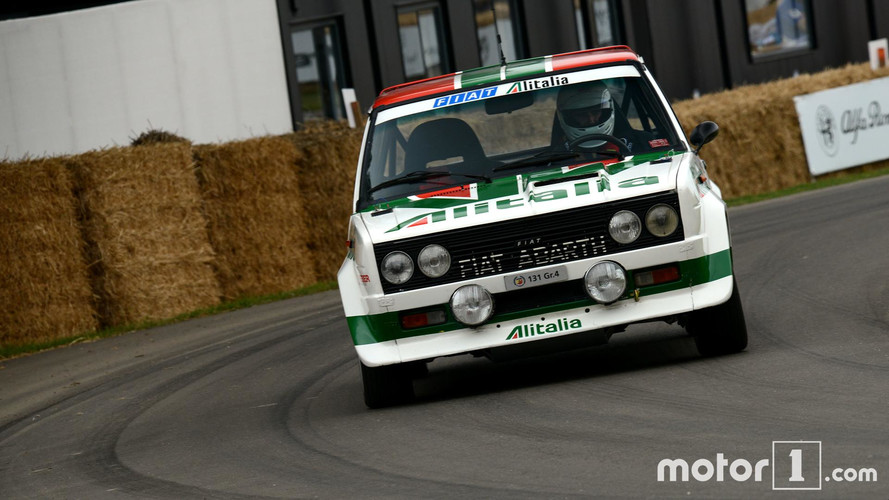 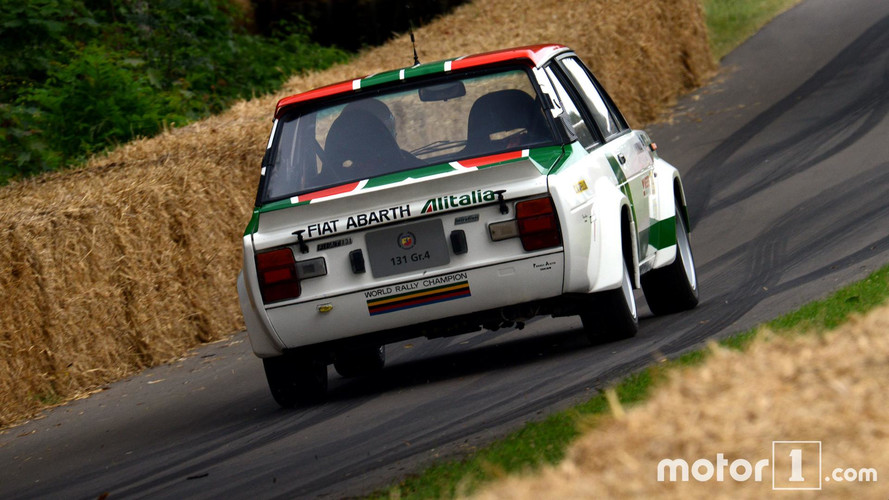 Further up the hill you get a sense of a car’s width when you encounter the flint wall. It’s… a big flint wall that can have the side of your car off in a moment, but thanks to the Abarth’s dinky dimensions it wasn’t a problem.

Less than two minutes later my run was over. Top of the hill reached, I joined the traffic jam that had cleared moments before. That little Abarth, even with only a couple of minutes behind the wheel, is a special little thing. I can’t imagine how awesome it was on the rally stages of the 1970’s…

Huge thanks to the team at FCA Heritage for the keys!