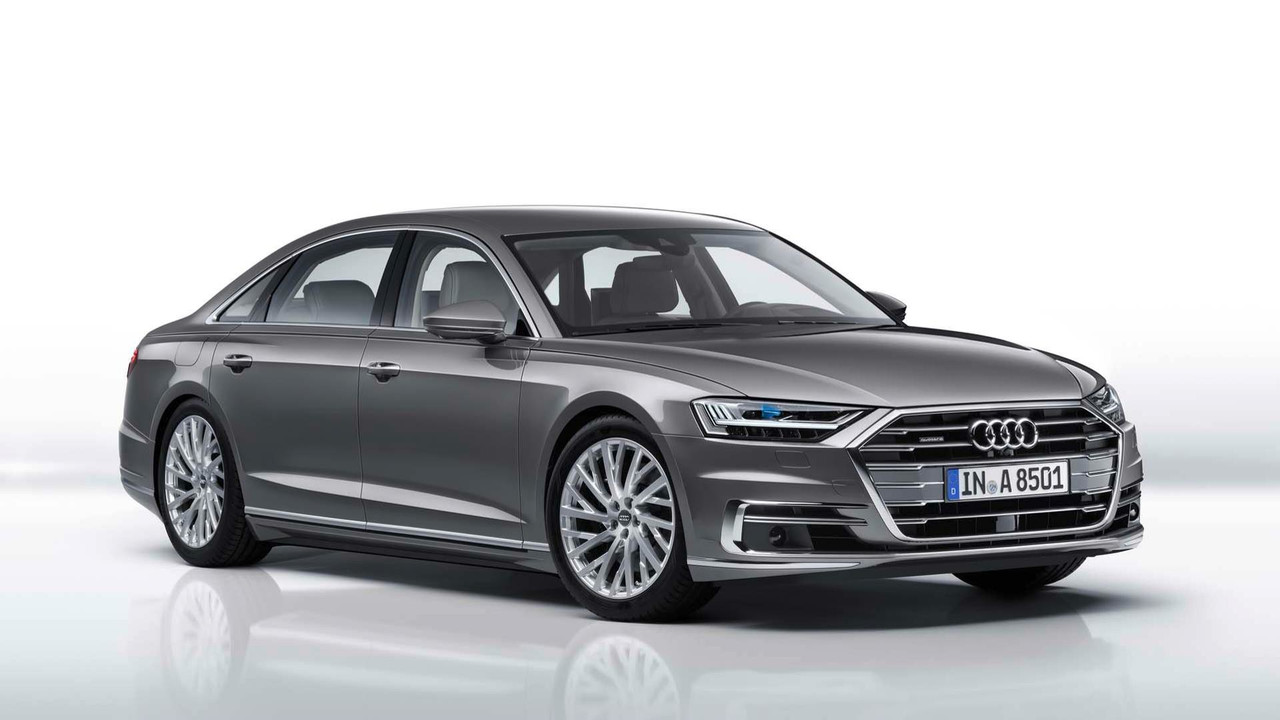 Audi has revealed the all-new fourth-generation A8 at the inaugural Audi Summit tech showcase in Barcelona. With styling that “signals the dawning of a new design era for the entire brand”, the tech-heavy new A8 has a touchscreen-laden interior, an all-hybrid engine range and, from 2018, a broad array of self-driving abilities.

On sale from autumn 2017, with guide prices starting from €90,600 in Germany (that’s around £80,000), the new A8 is 37mm longer and up to 17mm taller than the outgoing car, but 4mm narrower. It’s a big car: even the standard model is 5127mm long. 58 percent of it is aluminium, but Audi also uses steel, magnesium and carbon fibre reinforced polymer in the multimaterial Audi Space Frame, helping make it 24 percent stiffer than its predecessor (it's not yet ready to quote final weights).

That next-generation styling is formed around a wider, more upright singleframe grille, while the body sides are more flowing and muscular than previous Audis. It brings the themes of the Audi prologue concept car through to production, although it’s not the most outlandish interpretation of Audi’s new look. It is, after all, a sober-suited luxury limo first and foremost.

Typically for Audi, it’s gone big on headlight tech. HD Matrix LED headlights are offered with Audi laser lighting, while the rear has an LED strip between the OLED tail lamps: they’ll be like no lights seen on a big limo before. They even fire animations as the driver approaches and leaves.

Audi’s gone on a minimalist drive inside, replacing switches and buttons with ultra-crisp touchscreen displays: both the touchpad and rotary dial of the current A8 have gone. Instead, there’s a 10.1in touchscreen that sits flush in the dash (and disappears into its gloss piano black surround when the ignition is off). It’s controlled by tapping, swiping and pinching fingertips, with a supplementary display on the centre console masterminding climate control and text input functions.

It has haptic response – activate a function and the user both hears and feels a confirmation click – with glass buttons offering a similar response. If all this is too much, the new A8 is equipped with natural speech voice control, which should be as intuitive as using Apple’s Siri or Amazon’s Alexa.

Rear seat passengers have more space, super-bright HD Matrix reading lights, massage seats and their own smartphone-sized OLED control display to mastermind it all. The rear seat behind the front passenger offers an optional relaxation pack that will position the seat for business class aircraft levels of passenger comfort... and even warm and massage the soles of their feet via a unit on the back of the front seat. Yes, really.

The new A8 can drive itself, naturally. 'Artificial Intelligence' AI traffic jam assist takes over in slow-moving traffic which, says Audi, allows the driver to watch the in-car TV. The fact the firm’s happy to state this shows how advanced it is – helped by Audi being the first car brand to use a front laser scanner system here. It can be parked by remote control as well.

Audi says it's the first car to reach Level 3 autonomous drive – ahead of the Mercedes-Benz S-Class and, yes, ahead of the Tesla Model S as well.

Audi AI tech stretches to the active suspension, which is so clever, it can raise or lower every wheel individually. The flexibility this gives to create a drive with “huge latitude” is immense, says Audi. It’s made possible by modern 48-volt electronics, and is so intelligent, it can even sense an impending sideways crash and alter the suspension accordingly to best protect occupants.

Engines to start with will be a 286hp 3.0-litre TDI and a 340hp 3.0-litre TFSI. There are two V8s, a 4.0 TDI 435 and 4.0 TFSI 460. The 6.0-litre W12 version (presumably using a Bentley engine) arrives later. All cars have mild hybrid tech, so can coast with the engine off and restart without a jolt: the system saves a significant amount of fuel in real-world use.

Later, there will be a long-wheel base Audi A8 L e-tron quattro with plug-in hybrid drive offering a 31-mile EV range. Even this will be high-tech: wireless charging will be optional, promises Audi, enabling the driver to simply roll over a pad in their garage to charge the batteries.

More on the new Audi A8: