It has a new nose and new infotainment.

The long-running Maserati GranTurismo is getting due for replacement, but the firm isn't quite ready to show off its successor. So, instead, to keep things fresh for the charismatic Italian V8 GT coupe, it's rolling out a facelift for 2018, that sticks firmly to the template of what makes a facelift a facelift: it has a new nose.

It was revealed in wonderfully flamboyant fashion – by driving a GranTurismo MC up to the New York Stock Exchange so Maserati CEO Reid Bigland could ring the closing bell. The Italian firm then lined it up alongside the rest of its range outside the NYSE building, along with a 1962 Le Mans-running Maserati Tipo 151 racer. 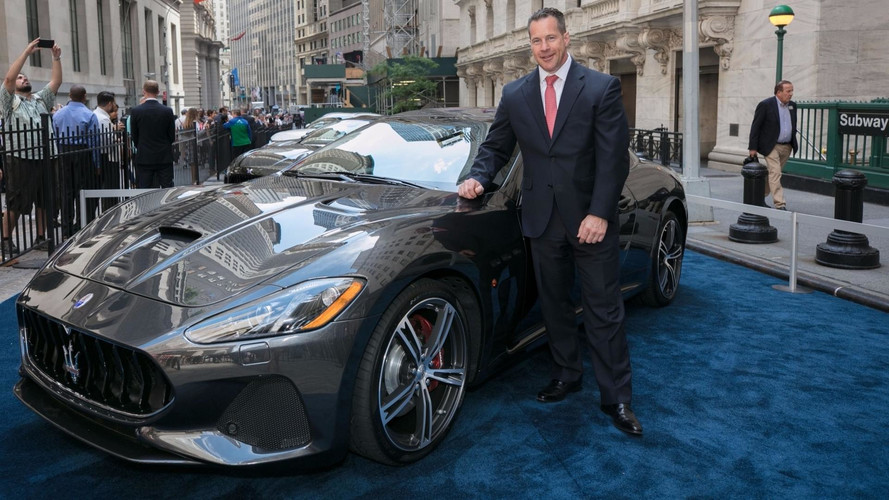 To date, Maserati has made 37,000 GranTurismo and GranCabrio models. The 2018 changes continue the two-variant structure: Sport and MC, both of which feature the same Ferrari-built 460hp 4.7-litre V8. Yes, these days, that’s looking a bit lightweight, as is the 384lb ft of torque, as is the fact its automatic gearbox only has six gears. So 0-62mph in 4.8 seconds isn’t anything to write home about, although the slightly lighter MC does do it in a slightly reduced 4.7 seconds (and has a higher top speed).

Never mind performance though, look at the new front end – it has a sharknose hexagonal grille mimicking the Alfieri Concept, which not only (says Maserati) gives a 3D effect to the front end, but also reduces the Cd drag factor from 0.33 to 0.32. It’s slipperier through the air, which should be good for fuel efficiency and high-speed grand-touring refinement.

Inside, fancy new Poultrona Frau leather seats are now offered, but more noteworthy is the new 8.4in touchscreen infotainment system which features both Apple CarPlay and Android Auto. There’s a Harman Kardon premium sound system and even a redesigned centre console with forged aluminium rotary knob to control the infotainment menus. This has shifted the driving modes button pack to further down, next to the gearlever.

These changes don’t dramatically update the GranTurismo, nor look likely to ramp up its ultra-slow-selling status. But they do show that Maserati still cares enough about its big GT coupe to keep on polishing it. Let’s just now hope it’s the final facelift before the beautiful Alfieri arrives…