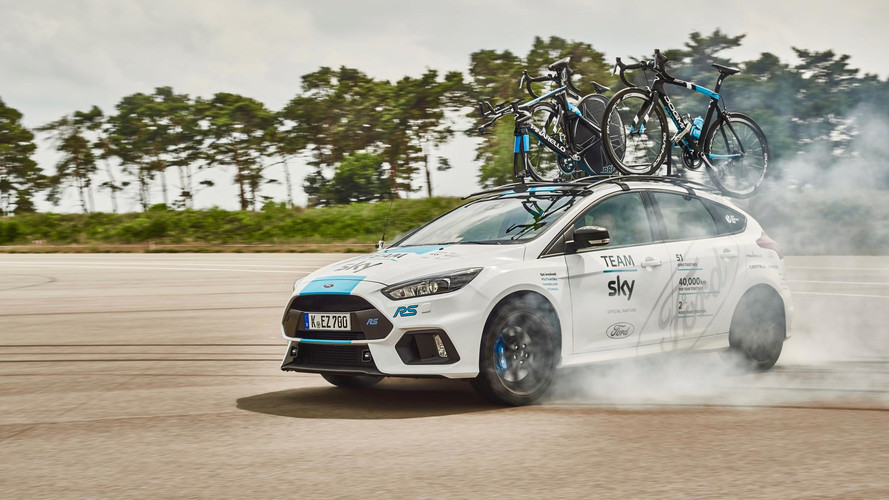 Team Sky will use the 350hp hot hatch during the iconic French bike race.

The world's most famous cycling race isn’t just won by the individual on the bike – backstage there's a whole host of personal fitness gurus, data monitors, and medical experts.

Another unsung hero of the Tour de France is the support car. Team Sky knows this and in searching for victory in 2017 year it has employed the use of a rather unorthodox vehicle...a Ford Focus RS.

Loaded with just about everything a rider could need, including spare bikes, the support car is a valuable asset. Previously Team Sky has used more sensible models such as the Ford Mondeo or Jaguar XF Sportbrake, but it does have a track record for selecting cars parking in the left field.

As capable as the Ford Focus RS Option Pack is, featuring a new differential over the standard car, modifications were somewhat necessary.

Firstly, a custom bike rack needed to be fabricated for the roof. That was then swiftly followed by some alterations to the interior Recaro seating enabling more movement for team members. That said, the tough ride will be encouragement enough for cyclists to get back on the saddle if they're feeling a bit lazy.

However, the biggest changes were needed in order for the RS to carry an extra 350kg of weight, with some toughening up required. Something that hasn’t been tampered with, but is less likely to find any use, is the car's famed Drift Mode.

The Focus RS will be used to keep up with Team Sky’s fastest riders, but also swiftly gather reconnaissance – information on the road ahead, especially hazards, can be the difference between winning or having a nasty accident.

This Sky-liveried hot hatch also celebrates Ford’s renewed support of Team Sky as vehicle supplier until the end of 2019. A fleet of S-Max, Edge, Transit and all-wheel drive Mondeos will also be on hand.

Click below to watch our Honda Civic Type R vs. Ford Focus RS head-to-head to see how the Ford might cope with the world's toughest cycling endurance challenge.