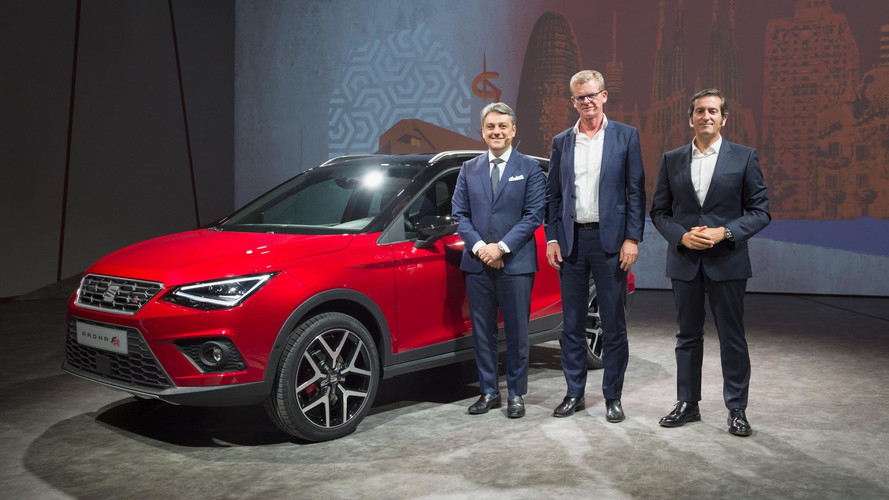 Seat has finally revealed its new Arona small SUV crossover, after months of shadowy teasers and unexpected full model reveals. The SUV sister car to the well-received new Ibiza supermini, the Arona is taller and wider than its supermini sibling, further perfecting the formula originally established by the Nissan Juke.

The small SUV sector is thriving at the moment, with the Renault Captur outselling the Clio in the UK, and models such as the Peugeot 2008 and Vauxhall Mokka X all selling extremely strongly. The latest duo to join the fray are the Hyundai Kona and Kia Stonic, and the sector has grown four-fold since 2015 alone; now, it's Seat's turn, with the reveal of the Arona ahead of its public debut at the Frankfurt Motor Show in September.

Once again, Seat is using its all new MQB A0 platform, as already used in the Ibiza. This high-tech new architecture is currently exclusive to Seat within the Volkswagen Group empire, although it will later roll out to other cars such as the new VW Polo and its SUV sister car. As well as being highly flexible, Seat says the new underpinnings allow it to load the Arona up with latest-gen tech: Apple CarPlay, Android Auto, autonomous emergency braking, driver alertness monitor, wireless phone charging and keyless entry are all available.

Every engine is turbocharged: there's a 1.0-litre TSI in either 95hp or 115hp guise, a 150hp 1.5-litre TSI, or a 1.6-litre TDI diesel with either 95hp or 115hp. The Arona will be a front-wheel drive SUV, albeit one with a raised ride height and either manual or automatic gearboxes.

Seat says styling has been influenced by the very popular Ateca, albeit with more of a city-friendly feel. That's why it has tough bumpers, rubber side skirts and beefy plastic wheelarch extensions; expect the planned Seat range-topping SUV, due in 2018, to be a little more luxurious and a little less urbane. Like all SUVs, though, Seat's promising a high-set driving position. This is a key reason why people are drawn to crossovers, after all.

The Arona also gets the multi-colour configurability so many small SUVs offer – note the contrast roof colours in our images below, which Seat says are two of 68 different combinations.

A vehicle combatively described as "setting new standards in the segment", Seat will sell the Arona in four trims: Reference, Style, FR and Xcellence. Promisingly, the warm-SUV FR is said to have 'dual-mode' suspension and, if response is similarly warm, could even lead to a later hot version. Perfect for building upon Seat's sporty brand image.

The third new Seat to be launched in 2017, the Arona will be showcased at Frankfurt and is expected to arrive in dealers not long afterwards. Prices are yet to be confirmed: expect a starting point of around £16,000.