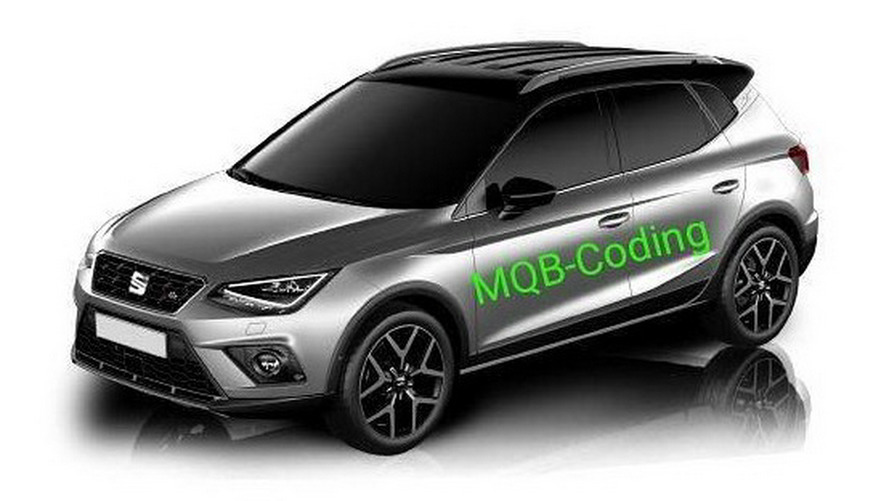 This is it: the production-ready Arona.

Seat will, on Monday 26 June, pull the covers off its all-new mini SUV Nissan Juke (and new Kia Stonic) rival, the Arona. But it seems the covers of one car have already been pulled off – here, presumably being hoisted into location ready for the reveal, is the new Seat Arona. You'll be able to order one that looks exactly like this from dealers later this year.

The crossover SUV sister car to the new – and warmly received – Seat Ibiza supermini, many weeny SUV traits are present and correct: the plastic-edged wheelarches, the tough-looking rear skid plate, the brightly-coloured contrast roof colour. There's also likely to be a set of Seat's bright LED headlights at the front, although not all models will get these.

Just as the Renault Captur and Peugeot 2008 have alternative but related-looking dashboards to their Clio and 208 sister cars, expect the same for the Arona. Seat will fit a range of latest-generation infotainment systems and, in time, it may even get the option of electronic instruments.

The engines will be same as with the Ibiza; 110hp 1.6-litre TDI, 150hp 1.5-litre TSI Evo and the strong little 115hp 1.0-litre TSI petrol. Don't expect an all-wheel drive version, though. It's not that sort of SUV: buyers will chose it for its high seating position and space efficiency (it effectively replaces the dull old Seat Ibiza ST estate), not its off-road prowess.

The launch of the Arona should be of interest to Volkswagen Polo fans too: its arrival confirms the fact Volkswagen's own Polo-derived crossover will be coming soon. It's perhaps a bit too early to talk prices (we'd guess from £16,000 at a push), but we hope we'll find out more during the reveal next Monday, 26 June. Come back then to see if Seat's Arona is good enough to compete in the ever-growing mini SUV sector.