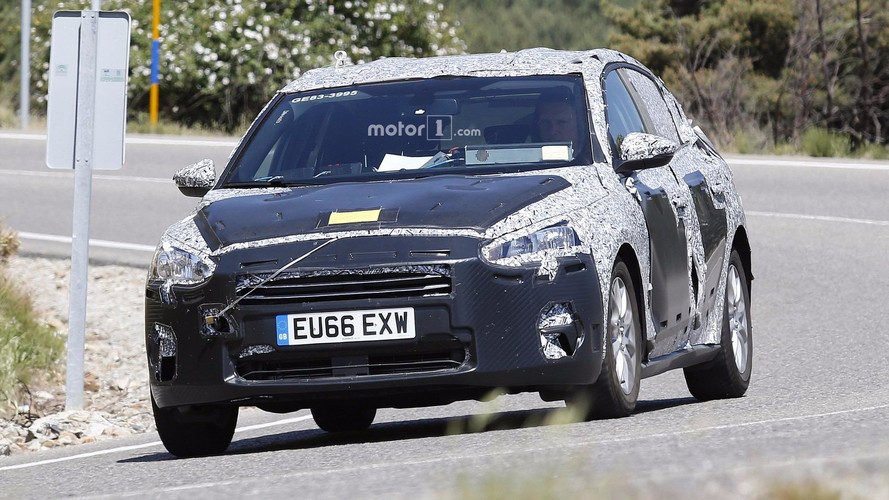 The current Ford Focus is getting due for replacement, so Ford engineers are now busy testing development mules of next year's all-new car. And our spy photographers have caught it, to give us some early indications of what the new family hatchback five-door will be like.

It seems Ford may be blending in a few of the cues seen in the new Fiesta that's due out in a few weeks, suggesting this once again will be more of an evolutionary design rather than a revolution. Ford did promise is more of a coupe-like rear end, and it certainly looks more sweeping and pert, but it will still be clearly a Focus. Albeit a bigger one: this is a longer car, with a stretched wheelbase, to create more space for those in the back.

Inside, it is to get a big Sync3 touchscreen standing proud on the dash (don't be fooled by the 'binnacle' of this mule car) plus lots of other details that we've already actually seen in the Fiesta. Other tech could include electronic dials and head-up displays.

We'd wager many of today's engines will be used in the new Focus, including its best-selling 1-litre Ecoboost petrol, a larger 1.5-litre version plus a couple of turbodiesels. The ST is likely to retain a 2-litre, though, pushed up to 275hp: the Fiesta ST may have downsized to a 1.5-litre three-cylinder, but that's a step too far for Ford. There's almost certain to later be an RS version as well.

Where will we see it first? As it's an American company, we may see it debut at the Detroit Auto Show in January 2018; if not, expect it at Geneva 2018.