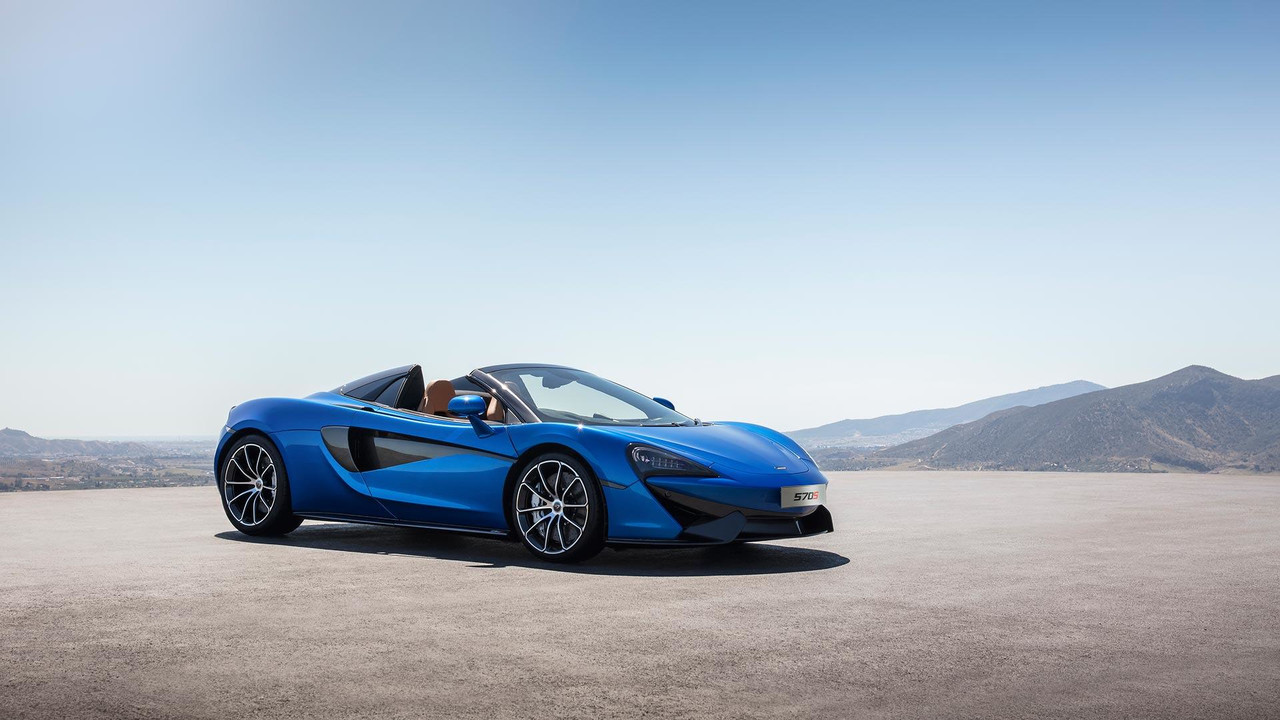 It's the most affordable open-top McLaren road car ever.

The new McLaren 570S Spider will open up sun-seeping McLaren supercar motoring to a much broader audience when it arrives in dealer showrooms from August 2017: the £164,750 starter price is more than £55,000 less than the cheapest McLaren 650S Spider, making its premium of just under £20,000 over the 570S Coupe it's derived from. It will make its public debut at the Goodwood Festival of Speed later this month.

Like the 650S Spider, the new 570S Spider is a clever convertible design that adds barely anything to the weight of the hard-top model. It weighs just 46kg more, and all of that is due to the folding hard-top roof mechanism. The car's carbonfibre innards are so robust, the firm hasn't add a single piece of strengthening material to account for the loss of the roof – and the 570S Spider is just as rigid as the coupe, adds McLaren.

It means this is a seriously potent machine, despite sitting in the McLaren 'Sport Series' range that's positioned beneath the 'Super Series' line-up which the 650S slots into. 0-62mph takes just 3.2 seconds and, if the roof is up, it will do 204mph. Lower the roof and the max speed also lowers – to a 'mere' 196mph. The same high-tech suspension as the 570S coupe lies beneath, including McLaren's adaptive Active Dynamics setup.

The roof uses the retractible hard-top tech seen in the 650S Spider, for 'best of both worlds' appeal. It lowers in 15 seconds and you can use it on the move at up to 25mph. You can also lower the glass rear screen when it's raised, so you can hear the 3.8-litre twin-turbo engine all the more clearly. Why not go for the sports exhaust to emphasise this yet further, suggests McLaren? Why not indeed.

Colours? Choose from the Sicilian Yellow pictured here, or Curacao Blue and Vega Blue if you want the other hues newly launched for the Spider. Otherwise, it's all the other colours we've already seen on the 570S coupe. Roof apart, the design is all but identical to the coupe as well: the sole difference is a 12mm higher rear spoiler, which has been extended to balance the different aero profile of the Spider roof.

The sooner you can place an order for the £164,750 570S Spider, the higher the chance of getting one for August delivery. Just note, the first 400 cars will be special launch edition models, with extra features and bespoke colours. These likely won't cost £164,750.