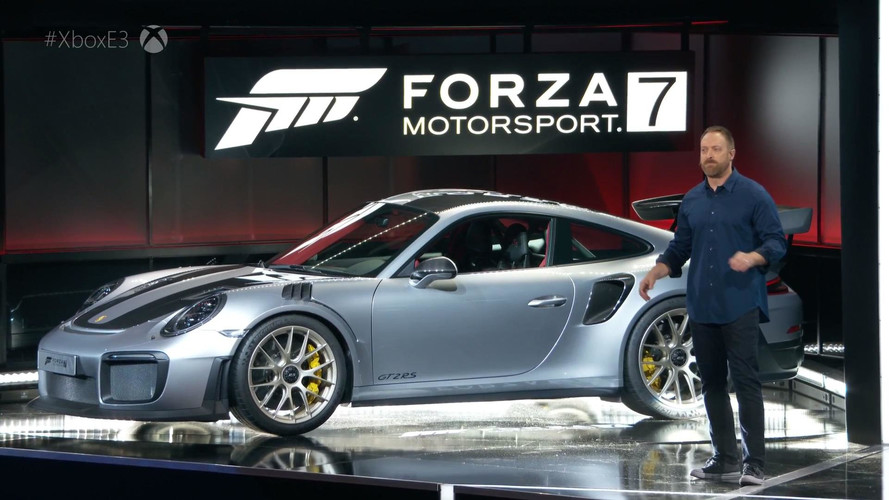 Drive it on your Xbox from October.

The most powerful Porsche 911 ever will feature in the upcoming Forza Motorsport 7 game – and it's made a surprise real-world debut at a gaming convention in Los Angeles. Porsche teamed up with Microsoft to reveal the range-topping 911 at the E3 expo where it was described as a 'monster' by Forza's creative director, Dan Greenawalt.

The GT2 RS will feature on the cover of the racing game when it arrives on PC and Xbox One on October 3, followed by a debut on the new Xbox One X on November 7th.

Technical details of the car itself haven't been revealed – but we can see an appearance best described as 'GT3 RS on steroids', with a massive rear wing, an aggressive front bumper and a carbonfibre roof.

The GT2's rear end and interior were out of sight for its reveal at E3, but in-game footage reveals large exhaust tips and a stripped-out cabin with a roll cage and a pair of serious body-hugging seats.

We know that the biturbo 3.8-litre sourced from the Turbo S and upgraded for the GT2 RS produces in excess of 641hp and 553lb ft of torque. Expect it to be paired with a PDK gearbox, while some outlets are reporting a power output close to 700hp for the six-cylinder engine. One thing's for sure, when the GT2 RS is revealed in full it'll become the most powerful road-going Porsche 911 ever made.

We expect to be able to get up close to the GT2 RS, and find more about its technical intricities, at September's Frankfurt Motor Show.