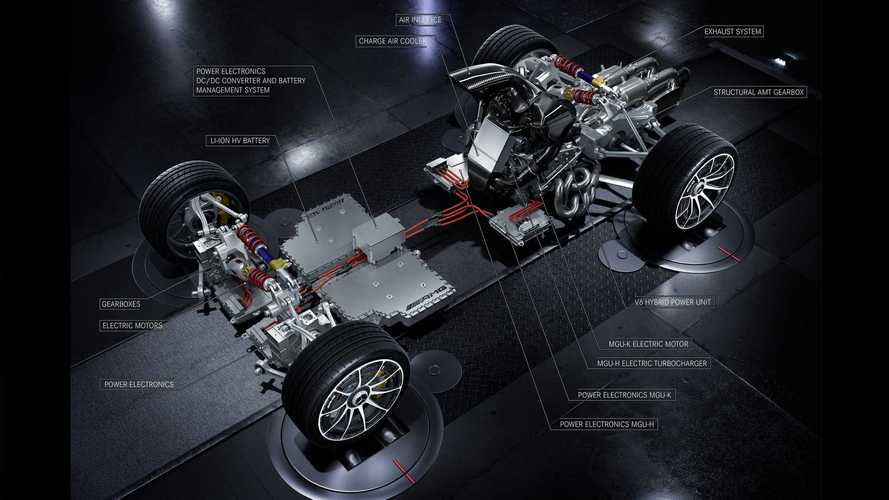 All 275 cars planned for production have already been sold.

The fascinating Mercedes-AMG Project One is making headlines once again as Mercedes-Benz revealed more technical information about the project over the weekend, during festivities to celebrate 50 years of its hot AMG division.

At the heart of the Project One, says Mercedes-AMG, is a 1.6-litre V6 engine derived from Lewis Hamilton’s 2015 Formula 1 car: it has a remarkable thermal efficiency rating of 43 percent. Compared to the F1-spec engine, the unit has received a bespoke crankshaft, new pistons, and overhauled electronics. AMG chief Tobias Moers reiterated the engine will last for about 31,000 miles at which point it will require a rebuild. The V6 idles at approximately 4,000 rpm and has a redline set at an amazing 13,500 rpm.

The six-cylinder engine works together with not one, but two electric motors. The first one – rated at 107 horsepower – serves the purpose of keeping the turbocharger spooled up permanently. The other one delivers 161 hp and is linked straight to the crankshaft.

An extra two electric motors have been mounted on the front axle and these will be able to propel the car on their own, giving the Project One an all-electric range of up to 15 miles. About 100 kilograms of the total weight is represented by the batteries mounted in the centre and borrowed straight from the F1 car. Interestingly, there are four times more cells in the hypercar than there were in Hamilton’s title-winning Mercedes F1 W06 Hybrid.

Exact details about the weight have not been disclosed, but at least we do know the entire drivetrain tips the scales at 420 kg. A report from a month ago indicated the vehicle will weigh less than 1,315 kg, but the information has not been confirmed. For what it's worth, both the engine and gearbox are going to be a structural part of the chassis made entirely out of carbon fibre.

With the combined output of five motors, the Project One will have in excess of 1,000 horsepower delivered to the road through a single-clutch, eight-speed transmission. To stop efficiently, Mercedes-AMG’s engineers are going to equip the car with carbon ceramic brakes on all four corners. At the back, there will be chunky 335-section tires.

Already sold out, the hypercar will be limited to just 275 units and is going to be produced at a rate of one car per day. AMG has made the promise to deliver all of them by the end of 2020. With the exception of China, the Project One will have road-legal status all over the world.

Meanwhile, real-life testing of the hybrid beast will commence in a short while and it will receive its world premiere in September at the Frankfurt Motor Show.