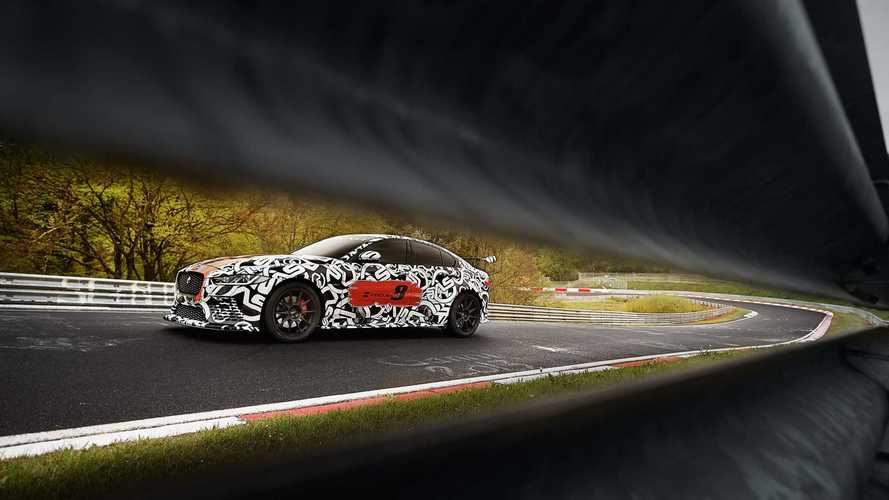 What the world really needs is a 600-horsepower Jaguar XE with a huge great V8 engine. Jaguar has delivered: today, it's announcing the ferocious XE SV Project 8, with a 5.0-litre supercharged V8 and the promise of supercar-matching performance, ahead of the car's full reveal at the 2017 Goodwood Festival of Speed on 30 June.

This is no fancy engineering fantasy, either. The specialist JLR SVO department is going to build 300 of them, for global distribution, in its second production car project after 2014's Jaguar F-Type Project 7. That had a supercharged V8, too - but the Project 8's is more powerful. Indeed, it's the most powerful road-legal Jaguar there's ever been.

Jaguar's not telling us a huge amount about it at this stage, but its teasers do point towards a 0-62mph time of around 3.5 seconds, possibly a 200mph top speed, and a price tag probably well in excess of £100,000.

JLR SVO MD John Edwards says "the time is right for SVO to produce the most extreme performance road car in the history of Jaguar. The new XE SV Project 8 takes aerodynamics and performance engineering to another level – it is conceived for enthusiasts and the most discerning collectors. The price for such an extreme performance sports car available in strictly limited numbers will reflect that."

Reflecting the fact Jaguar's dropped a 5.0-litre V8 into an engine bay that normally carries a 2.0-litre turbodiesel, the XE SV Project 8 has a bespoke bonnet with huge air outlets, plus bulging wheelarches and a massive rear spoiler. As the firm's revealed it undergoing testing at the Nürburgring, we can maybe expect some sort of lap record announcement as well.

All will be revealed next month at Goodwood. For now, let's simply savour the fact Jaguar has at last done what enthusiasts have been willing it to do for ages, and dropped a V8 into the XE. Are you worried yet, Mercedes-AMG C63?