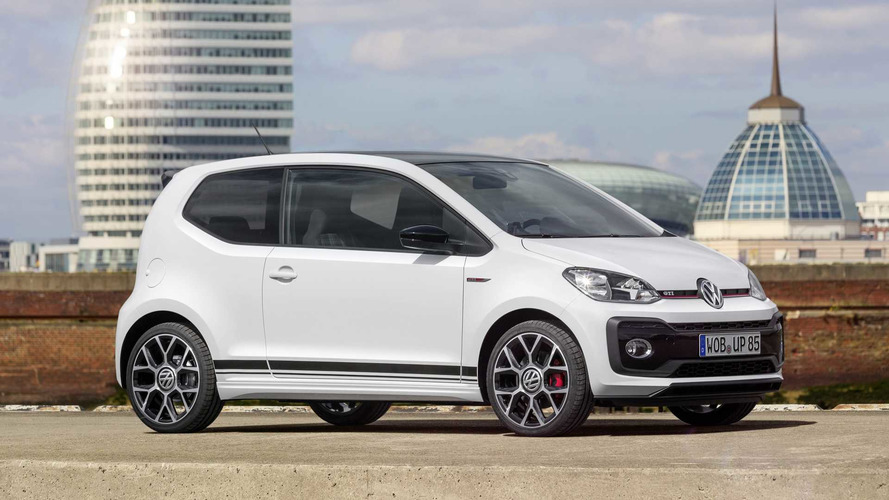 Although a concept for now, the pocket rocket will be launched in 2018.

Volkswagen has released these official pictures of its new Up GTI ahead of its unveiling at next week's Worthersee festival. Said to embody the philosophy behind the original Golf GTI, the feisty car is being billed as a near-production concept and will hit the production line early next year.

The GTI treatment applied for the first time on Wolfsburg’s pint-sized model includes a three-cylinder 1.0-litre TSI engine with 115hp on tap, thus making it 5hp stronger than its ancestor from 1976.

And while 115 hp and 170lb ft of torque might not sound like a lot of muscle, the Up GTI tips the scales at only 997kg. Despite being a lot heavier than the 810kg Mk1 Golf GTI MkI, the 0-62mph sprint takes a swift 8.8 seconds - two tenths of a second quicker than the Golf. As for the top speed, go all out and the Up GTI will hit 122mph or 9mph more than its ancestor.

Aside from being more powerful than the regular Up, the GTI stands out thanks to its slightly more aggressive body with beefier front and rear bumpers, roof-mounted rear spoiler, and bespoke 17-inch alloy wheels. Numerous glossy black accents further set it apart from the lesser versions, while the sportier suspension setup brings the car closer to the road by 15mm. Rounding off the changes on the outside are the black side strips and the typical GTI red piece of trim applied onto the grille as well as on the black tailgate.

Hopping inside the cabin, the range-topping Up gets a sporty steering wheel wrapped in leather and adorned with the “GTI” lettering. Other goodies include the familiar tartan seat pattern and the GTI gear knob as one would expect from any GTI-branded VW.

When the production car will be launched at the beginning of 2018, it will look virtually the same as this one. It will allow customers to embrace the GTI spirit at a more affordable starting price, one that will significantly undercut the forthcoming Polo GTI’s sticker

Meanwhile, the concept will be exhibited in the coming days at the annual GTI Meeting at Wörthersee where VW's apprentices are going to show a tricked-out Golf GTI from the current generation.

World premiere of a new GTI:
First up! GTI1 is a tribute to the original GTI

A circle closes 41 years after the debut of the first Golf GTI: at this year's GTI Meet at Lake Wörthersee (24 to 27 May), Volkswagen is presenting a compact, sporty car very much in the spirit of the original GTI – the new up! GTI. The concept and power output of the 85 kW / 115 PS up! are broadly in line with the Golf GTI MkI presented in 1976 that had 81 kW / 110 PS. The near-production concept car pays tribute to this icon – with compact dimensions, a low weight, a powerful engine, sports running gear and the typical insignia of a GTI (including red stripes in the radiator grille, seat covers in "clark" tartan pattern). This sporty small car will certainly bring a new dimension of driving fun to the compact class. A typical GTI feature is the sophisticated sports running gear. It gives the car the agility akin to that of a go-kart, yet it also offers a high level of comfort. The production version of the up! GTI will be launched into the market in early 2018.

With the up! GTI, Volkswagen is building a bridge that spans four decades: when the first GTI was launched in the 1970s it democratised access to fast roads around the world – especially the overtaking lane of German motorways. Where large saloons and expensive sports cars had previously set the pace, the new compact Volkswagen suddenly stirred up the field. The red stripe in the radiator grille, the black double stripes across the side sills and behind, the black stripe on the tailgate immediately identified this Volkswagen as a GTI. Its 110 PS powered a kerb weight of just 810 kg and accelerated it to 100 km/h in 9.0 seconds. Top speed: 182 km/h. The colours for the market launch: "mars red" and "diamond silver". Later, white and black also became established as GTI colours.

The new up! GTI continues the creed of the lightweight and no-frills sports car with a compact format – from outside and inside similar in size to the original GTI. It is driven by a turbocharged engine (TSI) with powerful 230 Nm torque. The key data do indeed read like a Golf GTI MkI catapulted into the present day. Weight: 997 kg (significantly high-strength steels and more airbags). Vmax: 197 km/h. 0-100 km/h: 8.8 seconds. Colours: classic once again and typical of the GTI – the plain colours "tornado red" and "pure white" and the metallic colours "dark silver", "black pearl" and – as a new GTI colour – "costa azul" (blue).

The most powerful up! to date is immediately recognisable with its typical GTI insignia. At the front for instance the red stripe across the radiator grille with honeycomb pattern. Integrated above it is the GTI logo. Here the up! cites the archetypal GTI with features such as the double stripes across the wide side sill panels. The exterior mirror caps are in high-gloss black; the 17-inch alloy wheels have also been completely redesigned. They have a particularly dashing look in the wheel housings because the up! GTI features sports running gear, lowering the body by 15 mm. GTI features also characterise the rear: here, among other things, a red strip as well as a larger roof edge spoiler provides for greater downforce on the rear axle for optimised handling performance at higher speeds. The interior includes features as a leather-trimmed sport steering wheel, a GTI gear knob and the legendary "clark" seat pattern. The fact is: this GTI does not just look like one – it also drives like one. A new original.