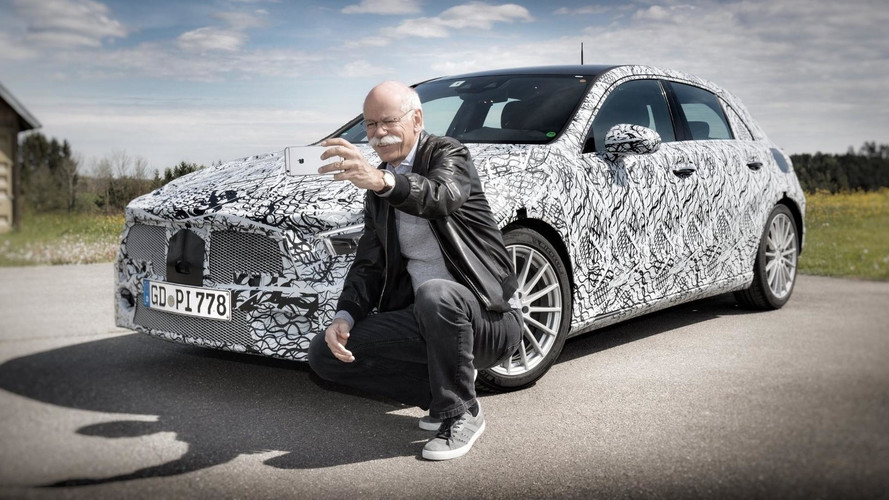 Plus, new spy shots from the Nordschleife.

Aiming your new compact executive car at high-mileage business users? Where better to tease it than networking platform LinkedIn? That's what Mercedes-Benz has done with the next-generation A-Class ahead of next year's official debut.

A selfie featuring none other than Daimler chairman, Dieter Zetsche has been posted on the site, where he describes the next-gen A-Class as being “special” and mentions the wraps will come off at some point next year. The images come from a recent test drive that also involved other new vehicles, including the forthcoming CLS.

Zetsche reiterated Mercedes’ plans to expand the family of compact models to eight members — including an A-Class saloon — and all will employ “more advanced assistance systems to pave the way into the future of autonomous driving.”

Daimler’s head honcho goes on to specify the A-Class’ development involves using “one of the world’s most capable climatic wind tunnels” capable of simulating temperatures varying between -40 to +60 degrees Celsius as well as wind speeds of up to 165mph. Located near Stuttgart, the tunnel can even replicate tropical rainfalls and snowstorms to make sure the cars being tested there will withstand all kinds of environments as one would expect from a global product.

In related news, our spy photographers based at the Nürburgring have spotted the 2018 A-Class in action. The hefty amount of disguise applied on the prototypes can’t hide the fact the new generation will be slightly wider and longer than the current model and that will translate into a more spacious interior cabin.

Judging by the lowered sports suspension, front grille treatment, and the dual exhaust tips, it looks like Mercedes was testing a sportier version of its posh five-door hatchback and it might have been the new version destined to slot between the A250 and the flagship A45.

All new-gen compact cars with the three-pointed star logo will share the updated MFA platform and might get a dual digital screen layout if the video below showing a different prototype is any indication. It goes without saying the high-tech look will be offered as optional equipment as the lesser models will be stuck with analogue dials.

The fourth-generation A-Class (W177) will lead the way for Mercedes’ upgraded compact family and will be out in 2018, with the other seven members to arrive in the following years when we’ll likely see a GLB aka “mini G-Class.”