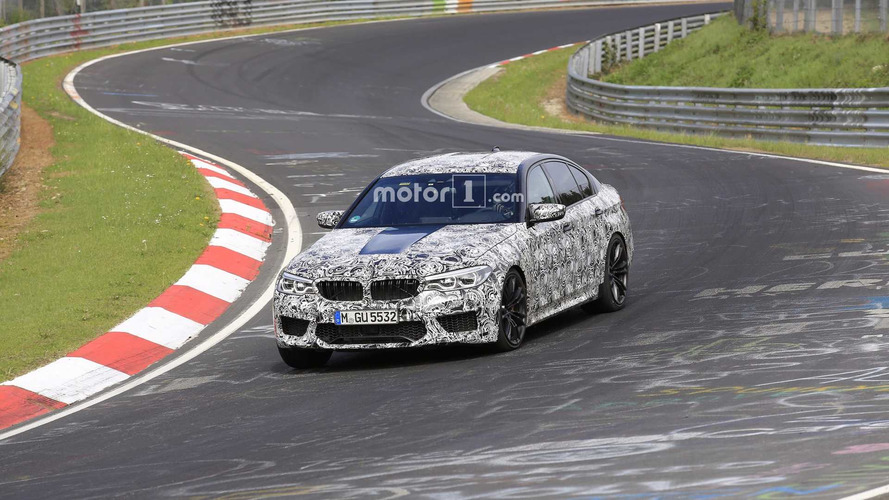 The super saloon in its natural habitat – at the Nürburgring.

BMW has been undertaking the latest round of testing for the upcoming 2018 BMW M5 at the Nürburgring. As the car's launch approaches, so the disguise is slowly falling away: sure, it's still wearing a lot of camo, but we can still spy the aggressive front bumper and beefy air vents as well as the bulging wheel arches and the new M door mirror caps.

An M6 Coupe-derived carbon fibre roof is hiding underneath that psychedelic camo while at the rear there's a discreet bootlid spoiler Bigger alloy wheels matched by upgraded brakes are also on the menu, as are M-signature quad exhaust tips flanking what looks like a diffuser. The prototype also rides substantially lower than the regular 5 Series models and, overall, already looks rather more menacing than the temporary range topper, the M550i xDrive.

Speaking of which, the new-gen M5 is expected to use an evolution of the same biturbo 4.4-litre V8 engine developing in excess of 600 horsepower. For the first time ever, all that M power will be channelled to an xDrive all-wheel drive setup, but there will still be a way to punish the rear tires and make the M5 tail-happy. Yes, there are rumours of a driver-selectable mode enabling the super saloon to become entirely RWD.

The M5 will feature an eight-speed automatic transmission, helping it reach 62 mph from a standstill in around 3.5 seconds. That might not sound overly impressive considering the Mercedes-AMG E63 S Sedan completes the task in 3.4s, but BMW will likely respond to that later on with a Competition Package.

Meanwhile, the standard M5 should bow before the end of the year and we might see it in the metal as early as September at the Frankfurt Motor Show. But if you can't wait, there's always the Alpina B5 Bi-Turbo – which you can even get as a Touring estate, serving as a substitute for the M5 Touring that BMW isn't willing to bring back.