This contactless Hyundai Ioniq is a chugger of the future 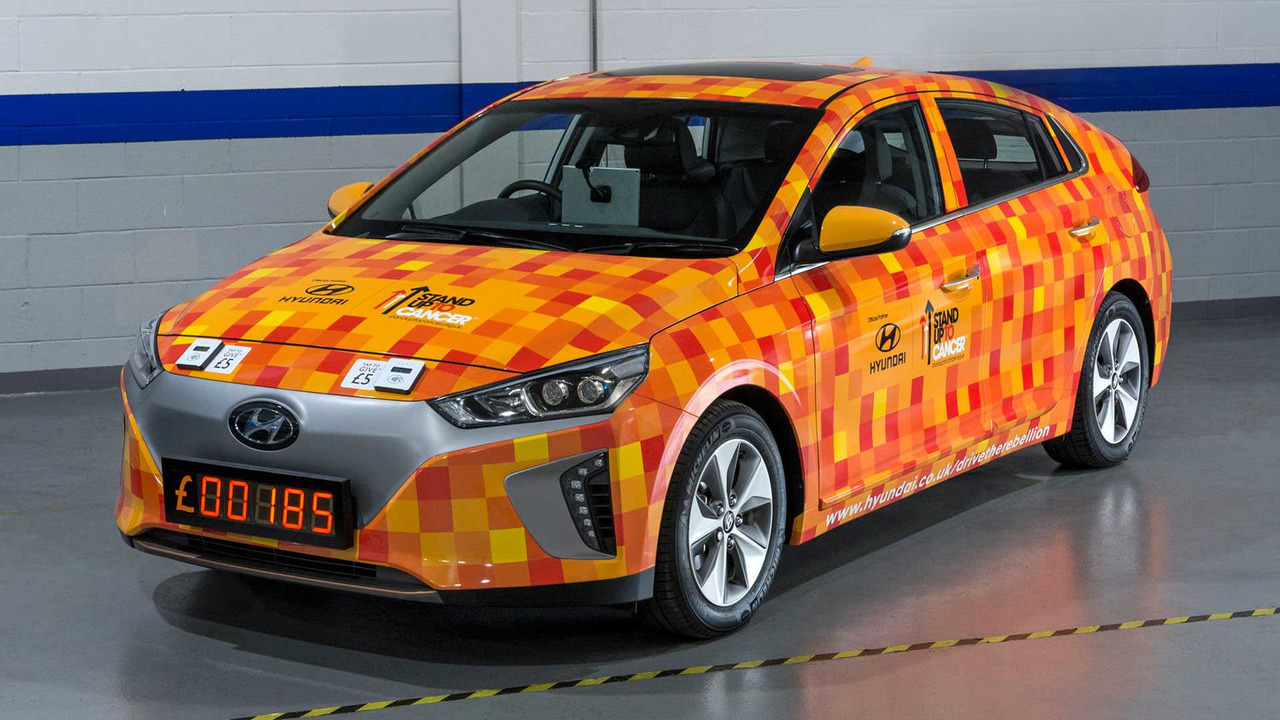 Are you guilty of giving so-called ‘chuggers’ a wide berth while walking down the High Street? You’re not alone – but this contactless Hyundai Ioniq could make donating to charity more fun than sitting in a bath of beans.

The electric car has been adapted with contactless payment points around the vehicle, allowing you to tap your card and make a quick and easy donation to Hyundai’s chosen charity, Stand Up To Cancer.

Motor1 has been to Hyundai UK’s High Wycombe workshop where the finishing touches are being put on the Ioniq ahead of its official debut at King’s Cross railway station on 22 May 2017.

The manufacturer’s bods have used a basic Raspberry Pi computer and a prototype Hyundai Ioniq to create the high-tech charity bucket. Tap your debit or credit card on a payment point on the bonnet or tailgate, and it’ll donate £5 to the Cancer Research UK backed campaign, triggering a flash of the lights and an audible ‘thank you’ message to be played.

If you wish to donate £10, you can do so using a contactless point on the driver’s door. This grants you access to the car’s interior, where you can use an Android tablet located on the windscreen to take a selfie and share it to social media, or print it using a photo-label sticker printer hidden in the boot. Print this out, and you can stick your picture anywhere you like on the outside of the car.

The car is completely road legal – a challenge, admits the engineers behind it, as the contactless card readers had to be embedded seamlessly into the bodywork, while the LED totalisers fitted over the front and rear number plates are stuck on using heavy-duty velcro meaning they can be removed easily. This is important as, once it has made its official launch at King’s Cross, it’ll be travelling around the country raising money at events supported by Hyundai and Stand Up To Cancer, as well as visiting dealerships.

“We are extremely proud to be supporting Cancer Research UK this year as an official partner of Stand Up To Cancer,” said Hyundai UK’s president and CEO, Tony Whitehorn. “We’re helping in the way that we know best - with innovation.

“Cancer doesn’t discriminate; one in two people born after 1960 will be diagnosed with the disease at some point in their lifetime. But our world-first contactless car will be designed to make joining the rebellion against cancer as easy, convenient, and as engaging as possible. I hope that people will come together, with their cards at the ready, and give generously to such an important cause that will save lives across the UK.”

The contactless car follows research which reveals that a third of Brits would be more likely to donate to charity if they could do so by using contactless technology – increasing to more than half of 18 to 34-year-olds.

When the modified Ioniq makes its public debut at King’s Cross station next week, double olympic gold medallist boxer Nicola Adams and broadcaster Jake Humphrey will be encouraging people to donate – and everyone who does will be entered into a competition to win a brand new Ioniq.

Find out more about the Hyundai Ioniq: