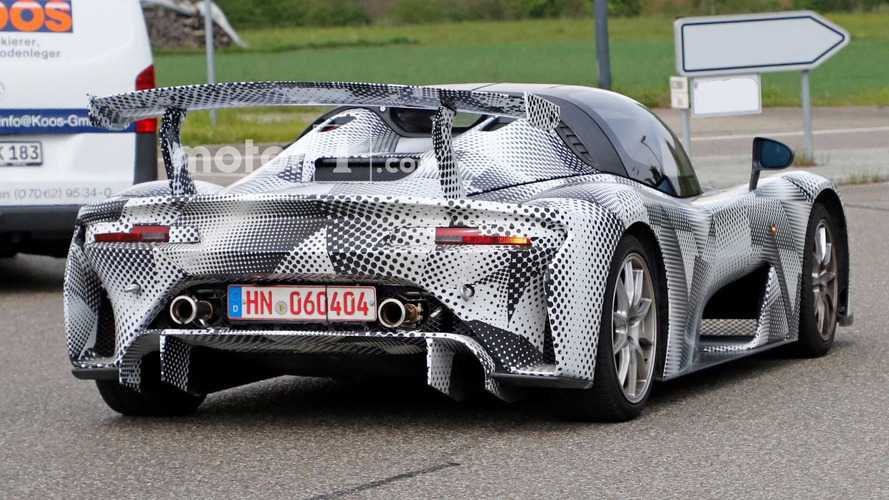 Will get Ford-sourced 2.3-litre turbo engine.

Less than a month after we spied Dallara’s first road-going model for the first time, we have another batch of spy shots, this time depicting a different prototype. Taken in Germany, the photos reveal the company is working patiently on the development, as no camouflage has been removed compared to the previous mule.

Despite the heavy disguise, this test car gives us a good idea of what the production version will look like. From what we can see under the camouflage, this machine isn't likely to be the prettiest on the market - but it will prioritise functionality over aesthetics. For example, the skinny pillars and targa-like roof suggests the driver will have an amazing field of view.

The rear end is actually hotter with its sleek taillights, wide diffuser, and dual exhaust system, while the massive fixed rear spoiler sends us some strong Porsche 911 GT3 vibes.

Aimed at track enthusiasts looking for an alternative to the KTM X-Bow, the production Dallara should be a really fast vehicle. In an interview with Autocar last year, Gian Paolo Dallara claimed the car should have a weight of only 800kg. Combine that number with a 2.3-litre turbocharged engine from Ford Focus RS, retuned to deliver about 400hp, and mated to a six-speed manual gearbox and rear-wheel drive for pure fun behind the steering wheel.

No exact debut date is available at the moment, but word on the street says the car will be revealed before the end of the year. Judging by the progress the company has made with its prototypes in the last three weeks, we won’t be too surprised if we see an official premiere next year. Dallara plans to produce and sell about 120 examples of the vehicle annually.