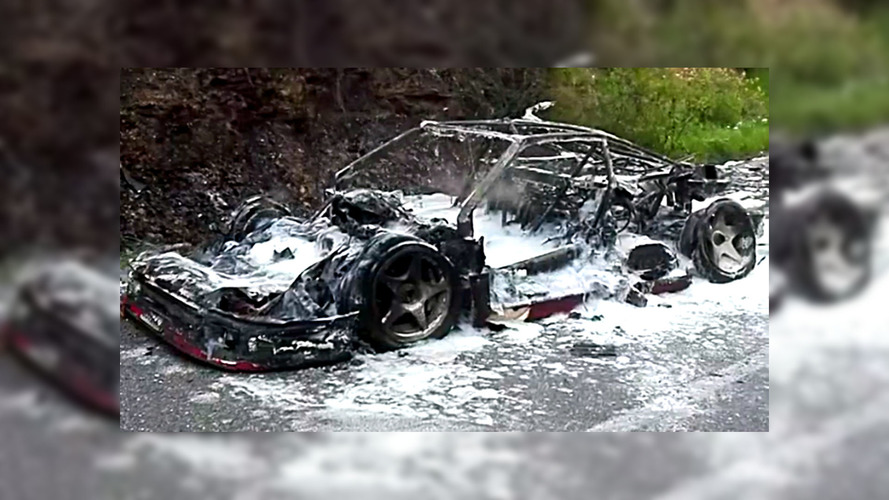 One of the eight F40 prototypes ever made by Ferrari is no more.

We are sad to report a rare Ferrari F40 has been engulfed by flames during a road trip to Maranello where the owner was driving to pick up his brand new LaFerrari Aperta. According to FerrariChat, the obliterated 1980s iconic supercar belongs to millionaire Jon Hunt, well known for his action-packed videos uploaded onto the TaxTheRich100 YouTube account. Indeed, an F40 was actually featured in a video called “Farmkhana” that came out in early 2016:

The car in question is believed to be one of approximately eight known F40 prototypes built by Ferrari for testing purposes; it’s the first of seven that were upgraded to GT specification by Michelotto. Manufactured in 1987 and exhibited at that year’s Frankfurt Motor Show by Auto Becker — an official Ferrari importer in Germany — it’s the sixth prototype made by Ferrari and was converted to GT spec in 1991.

The cause of the fire is not yet known, but we do know this particular F40 was actually raced during its 30-year-long life. There’s nothing worse than seeing such a rare supercar burn to the ground, especially when the video is shot vertically to make it even harder to watch:

Interestingly, Jon Hunt embarked upon a similar road trip back in 2014 to pick up the keys to his LaFerrari coupe. He also owns a series of other important prancing horses, including an F50, an Enzo, and the epic 288 GTO. You may be surprised to hear the F40 is not the only car in his multimillion-pound garage to perish this way. About four years ago, his lovely Lamborghini Miura SV suffered the same fate by burning to a crisp in central London: