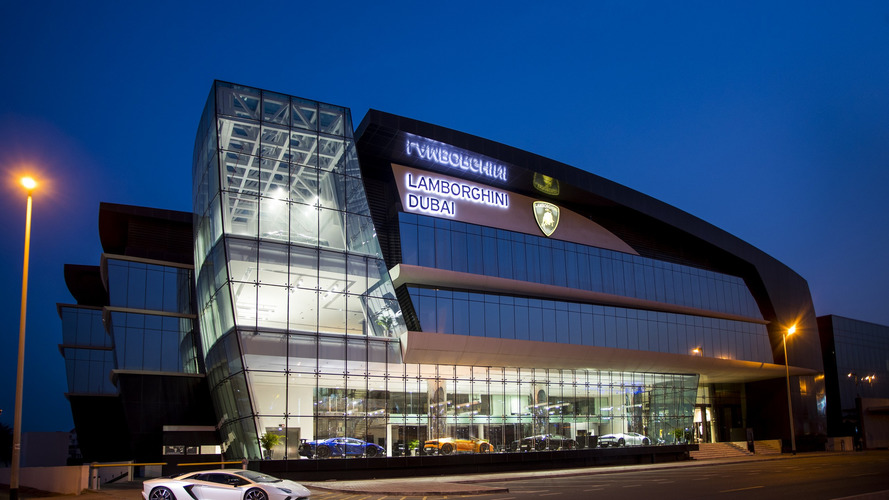 ... and is the brand's largest showroom in the world.

Lamborghini is happy to introduce its 12th showroom in the Middle East and Africa region. The Sant’Agata-based automaker is inaugurating its largest dealership in the world, located in Dubai, “preparing its international dealer network for the future”.

Positioned at Sheik Zayed Road, exit 41 in Dubai, the centre has a three-floor main building where all the current models of the supercar brand are displayed. With a total surface of 1,800 square meters, the showroom and the service base reflect “the need for increased space as Lamborghini expands its model lineup and plans to double sales with the launch of its new SUV by 2018”.

Speaking of arguably the most important debut for the brand in its 54-year history, the Urus SUV is expected to arrive next year with a starting price of around £175,000. Despite its huge importance for the manufacturer, the model won’t make or break it – or at least that’s what CEO Stefano Domenicali says.

Currently, Lamborghini is expanding its only factory located in Sant’Agata, Bolognese in Italy to secure the production of the Urus. Very soon, by the end of the month or in early May, the automaker should start building pre-production examples of the SUV – a “very delicate period, which is why 2017 will be a very important year” for the company.

It was already confirmed by top execs in the brand that the Urus will become the world’s fastest and most powerful SUV – and will also be the first model in the history of Lamborghini to get a plug-in hybrid powertrain. At this point, there’s no confirmed official debut date, but we expect to see the car in Frankfurt this year or in Detroit in early 2018.

18 Photos
++
Hide press releaseShow press release
Sant’Agata Bolognese/ Dubai, UAE, 27 April 2017 –  With the inauguration of the largest Lamborghini showroom in the world in Dubai Automobili Lamborghini is preparing its international dealer network for the future.
The new showroom and service centre, located in Sheik Zayed Road, exit 41, Dubai, UAE is one of twelve Lamborghini sales points within the dealer network in the Middle East and Africa.
With a total surface of 1.800 square meters over 3 floors the showroom and service centre environment reflects the need for increased space as Lamborghini expands its model line-up and plans to double sales with the launch of its new SUV by 2018.