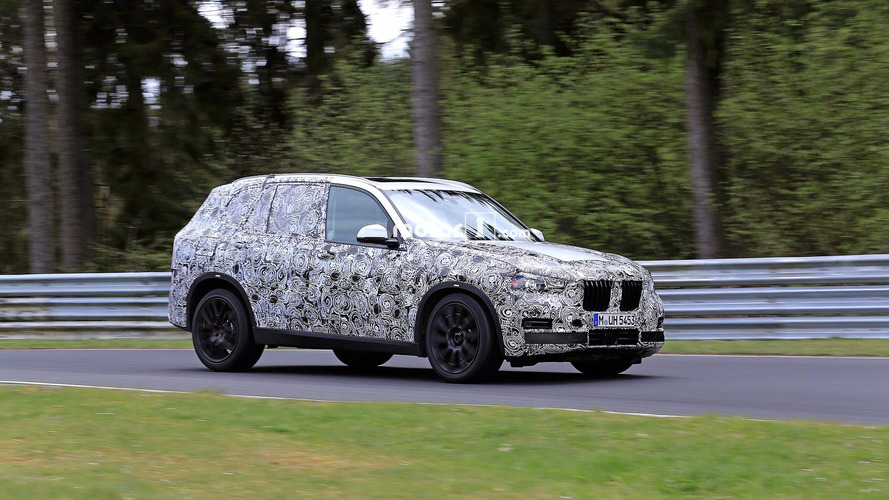 A switch to BMW's CLAR platform should let the new SUV cut off quite a few pounds.

The next-generation BMW X5 has left the arctic, and the camouflaged premium SUV has returned to the Nürburgring for more testing. Expect the fresh look to arrive in showrooms in 2018, and an official show unveiling to happen before the end of 2017.

BMW’s engineers continue to dress the future X5 in abundant camouflage, but the model’s styling is clearly an evolution of the current generation’s look. The SUV appears to have a blunt nose with a large grille and narrow headlights. There’s a gentle curve for the roofline that looks stylish but shouldn’t cut too much into the cabin space. Rectangular tailpipes integrate nicely into the rear bumper.

The new X5 moves to BMW’s CLAR platform that’s also underneath the latest 7 Series and 5 Series. The new SUV looks slightly larger than the current model, which should mean more cabin space. The fresh underpinnings could also slice a significant amount of weight off the crossover, possibly more than 100 kg.

A recent spy video lets us hear the future X5, and it sounds fantastic. Expect a similar engine range as the current model. Inline-six and V8 powerplants would probably make up the bulk of examples on the road, but a four-cylinder plug-in hybrid would likely be an option for buyers who prefer a greener drivetrain. Later, an M variant should be in the lineup, too.

If the X5 isn’t large enough, BMW is expanding its crossover lineup with the seven-seat X7, and an ultra-luxurious four-passenger version of the big model would top the lineup. Fully loaded examples of the big SUV would likely knock on the door of £100,000.