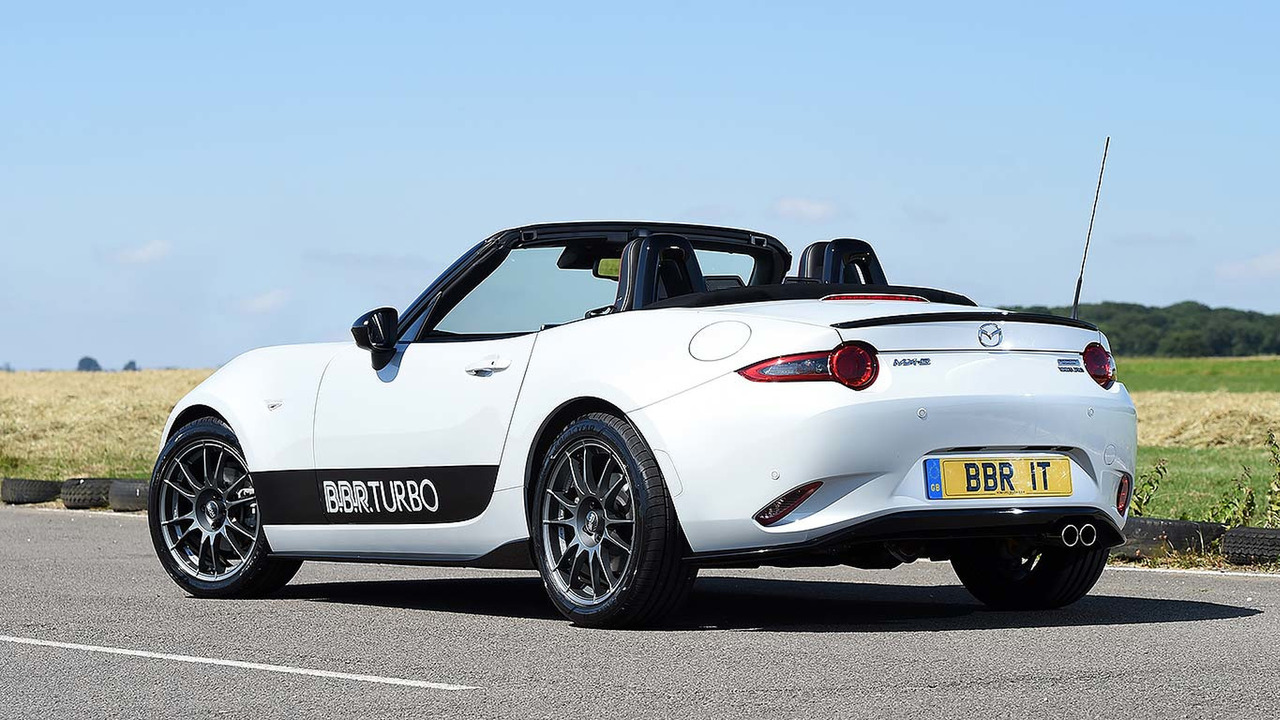 British tuning firm BBR has been fitting turbo upgrade kits to Mazda MX-5s for years – since the original model was launched here in 1990, in fact. It’s now launched a kit for the latest 2015-on Mk4 MX-5 2.0-litre… and even this introductory ‘Stage 1’ upgrade delivers 248-horsepower and 236lb-ft of torque.

This gives the BBR MX-5 Turbo a top speed of 155mph, and a 0-60mph time of 5.0 seconds. All for just under £6000 fully-fitted – and if you’re worried about doing such extreme things to your shiny new MX-5, panic not: BBR promises factory levels of finish, full MOT emissions compliance and no nasty new engine mannerisms. It’s even fully reversible, should you wish to take the car back to standard, and BBR has applied for both CARB and TÜV official approval.

Peak power from the boosted Skyactiv-G engine is delivered at 7150rpm and peak torque comes in at 3250rpm: more than 200lb-ft is available in a range spanning 2750-6500rpm. That potent 0-60mph time represents a reduction of more than two seconds in the benchmark dash – and it’s so fast, the 155mph top speed is an electronically limited one…

The kit, which is also available in the U.S. though distributor Flyin’ Miata, has been three years in development. It uses a twin-scroll turbo rather than a supercharger: BBR’s Neil Mckay said it was quickly clear that “a supercharger, with its high parasitic losses, would work against the Mazda Skyactiv-G engine’s ultra-efficient ethos. Significant boost levels would be required to deliver considerable power gains with a supercharger, which would be incompatible with the engine’s high compression ratio”.

Mazda’s intricate 4-2-1 exhaust manifold meant single-scroll turbos were not an option either, leading BBR to the twin-scroll unit: “Our extensive dyno and road testing has proven that our choice of a low back pressure twin-scroll turbocharger, with its enhanced exhaust scavenging ability, is the optimal solution. It works harmoniously with the original Skyactiv-G layout and knock-resistant technologies, as is evident by the impressive power figures achieved at very modest boost pressures.”

Like the sound of the Stage 1 kit but also like getting your hands dirty? Help is at hand; BBR also offers an MX-5 Turbo DIY kit, including all necessary hardware and software, for £5275. Both kits are offered with warranty packages of up to three years.