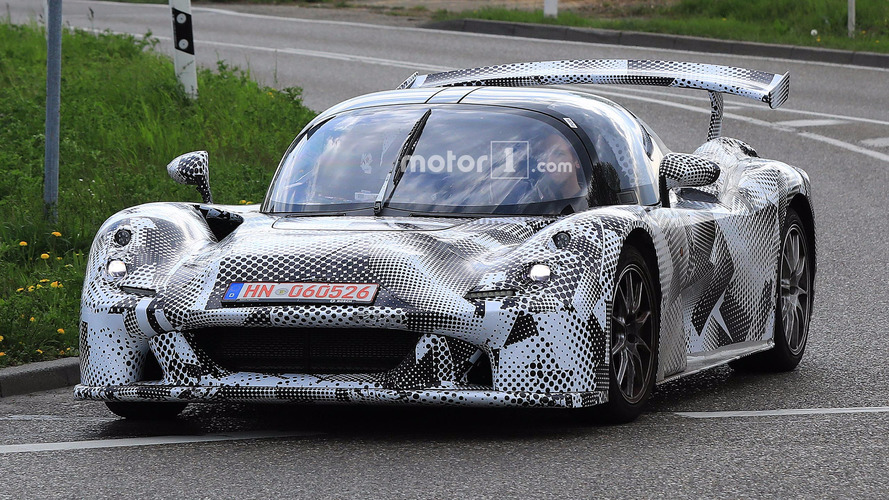 This coupe isn't pretty, but it looks like quite an adept corner carver.

Dallara is famous for building chassis that excel on the track in series like Formula One, IndyCar, and a plethora of sports car championships. These new spy shots reveal that the firm is closer than ever to having its own road-legal vehicle available to enthusiastic customers. This is our first look at the long-rumoured model.

Dallara’s design apparently prioritises functionality over aesthetics. The low-slung nose and bubble canopy don’t create a beautiful, flowing design, but they should make seeing the road incredibly easy. The ultra-skinny pillars and large greenhouse would create an amazing field of view. There don't appear to be traditional doors, either. It looks like the side sections open outward for access into the cabin.

The high-back, mid-engine layout would make for a difficult view out of the rear, and the only thing visible in the mirror might be the large fixed wing. An array of inlets along the deck lid look like they would do a fantastic job of managing the car’s aerodynamics through the diffuser and cooling the engine.

According to a report last year, Dallara wants to reveal its road-going model sometime in 2017. Judging by the state of this test mule, the target seems possible. The company would aim the vehicle at track enthusiasts that are also looking for something occasionally to take on the road or possibly even drive to the circuit.

Dallara's understanding of chassis constructions rivals the best in the world, and the firm’s full experience goes into this vehicle. The company allegedly has a target of the model weighing just 800 kilograms. The test mule’s big wing and diffuser point to the car being quite a corner-carver, too.

A 2.3-litre turbocharged four-cylinder sits behind the driver. This is reportedly a tuned version of Ford’s EcoBoost engine available in the Ford Focus RS and Mustang that would make 400-horsepower in this application. A six-speed manual would route power to the rear wheels, and there would no electronic driving assists.

The report last year indicated that Dallara intended to build 120 examples each year of its road car. Prices would be higher than a competing KTM X-Bow – a product that Dallara knows quite well after tuning the chassis on a limited-edition version of it.