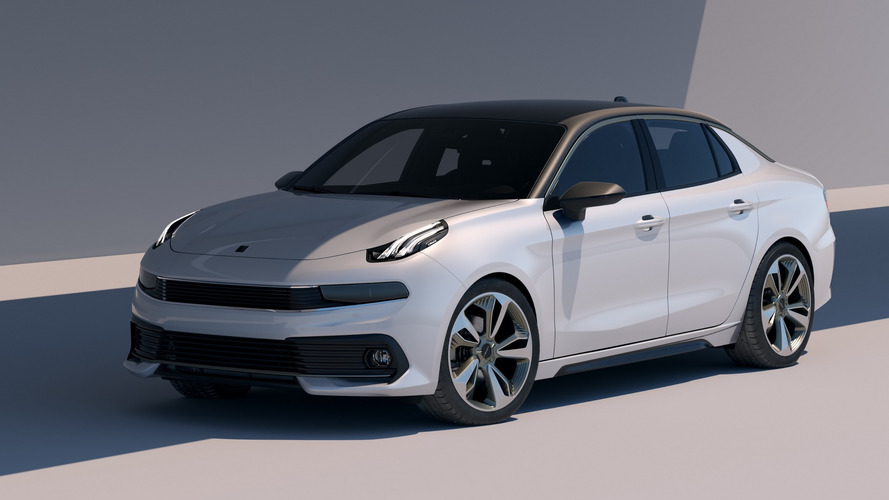 Underneath the skin likely sits the new S40.

Geely’s newly founded marque Lynk & Co will attend the Auto Shanghai 2017 event in China beginning with Wednesday to show the '03' saloon concept previewing a new compact four-door. Much like the '01' crossover unveiled towards the end of last year, the 03 will ride on the CMA platform developed by Volvo. As such, the saloon will share many of its bits and pieces with the next-generation S40.

The exterior design echoes that of the aforementioned crossover and, dare we say it, looks rather interesting with the full-width upper and lower grilles as well as the headlights mounted up high flanking the bonnet. The predominantly white body is contrasted by the black roof and side mirror caps, while the side skirts are also partially painted in black. A set of chunky five-spoke alloys nicely fill out the wheelarches.

At the rear, there is a pair of exhaust tips to lend the saloon a sporty vibe. Those L-shaped taillights originally seen on the 01 have made the transition towards the new saloon without any big changes. Much like on the crossover, the rear clusters extend onto the bootlid, which by the way seems to be wide to make it easier for loading and unloading stuff.

Hopping inside the cabin, it appears to have been mostly carried over from the Volvo XC40-based crossover concept, right down to the design of the air vents, steering wheel, and centre console. An all-digital instrument cluster is noticeable, as is the fairly generous size of the infotainment’s touchscreen.

While technical specifications are not available at the moment of writing, the Lynk & Co 03 probably has a turbocharged 1.5-litre petrol engine working together with an electric motor, like the 01. The production car will be closely related to the next-gen Volvo S40, so expect an assortment of three- and four-cylinder engines, all of which are going to be turbocharged. Gearbox choices will probably include a manual and a seven-speed, dual-clutch automatic.

Since it will ride on the same CMA platform as the S40, it means the 03 will have access to Volvo’s wide array of safety and driver’s assistance systems. The production-ready model will initially go on sale in China after the launch of the 01 crossover due in the fourth quarter of 2017 in the People's Republic. United States and Europe are expected to get the 01 in 2019, so the saloon is unlikely to arrive before the end of the decade.

Alain Visser, Senior Vice President of LYNK & CO, said: “Now with two cars in the LYNK & CO family, just five months in to our company’s life, the promises we made of having a range of vehicles ready, high quality, unrivalled technology and connectivity as standard, and a unique brand identity, are being proven. On top of this we now add a lifetime warranty on every car, and free data traffic for connectivity, to further underline our determination to challenge the traditional business model of the car industry.”

Some 800 guests were invited to share at an excusive event in Shanghai, where Alain Visser presented the LYNK & CO offer, based on state-of-the art connected cars priced competitively.

Alain Visser also stated that LYNK & CO will offer, not only online sales and home delivery services, but also a subscription model with flexibility bringing the owner and user experience right up to date with the expectations from a new generation of car buyers, used to smartphone app service levels of convenience.

“We believe LYNK & CO will offer the most connected cars in the world, with the world’s first in-car digital share function. We also offer a completely new business model, with a simplified product offer, transparent fixed pricing and an attractive purchase and ownership experience starting here in China this year. We will bring a unique offer of connected mobility, with the option to share your car, where everything is included. The key to everything we do is simplicity,” said Alain Visser.

On April 19th at the 2017 Shanghai Auto Show, LYNK & CO will showcase the production ready version of the 01 at a press conference lead by Alain Visser. The company will also showcase the 03 Concept, a design prototype, where the key design features of LYNK & CO will be revealed by Peter Horbury, Excecutive Vice President Design at Geely Auto Group.