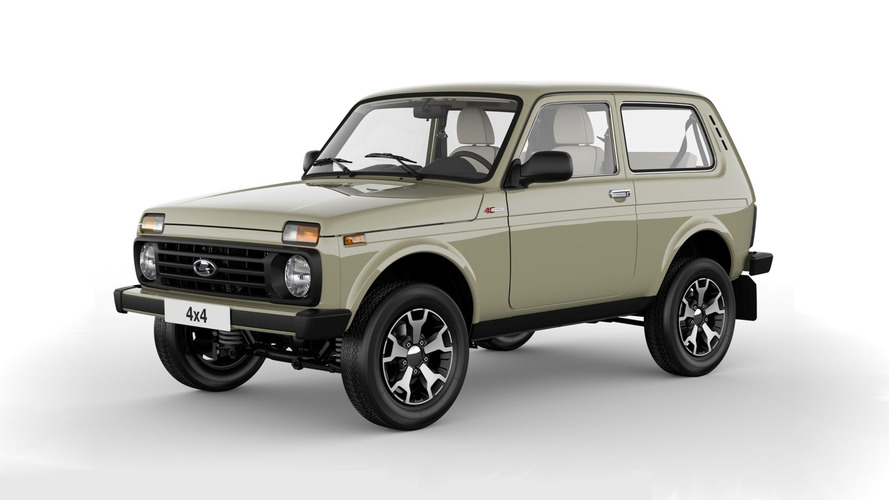 Four decades later, the Niva is alive and kicking.

It was on April 5th, 1977 when the VAZ-2121 'Niva' entered series production with a permanent four-wheel-drive system, independent front suspension, and front disc brakes. Created initially for the countryside, the car went on to become popular in Russian cities as well as outside its homeland. At one point in the model’s lengthy life cycle, about 70 percent of the cars produced were shipped outside of Russia, with the vehicles being exported in many European countries as well as in Japan. In the 1980s, a right-hand-drive Niva was created to allow the automaker access additional markets. In total, more than 530,000 units have been exported.

And they're still making it.

The most popular Niva of them all would have to be the five-door version with an extended wheelbase. Although it doesn’t look like it, AvtoVAZ says the Niva has been constantly updated over the years and the most modern version is the 'Urban' packing niceties such as air conditioning, body-coloured plastic bumpers, metallic paint, alloy wheels, and an improved interior cabin. No less than 30 derivatives of the Niva have been produced, including pickups, minivans, emergency vehicles, as well as floatable swamp buggies, military amphibious vehicle, and even a circus car driven by trained bears.

Now, 40 years later, the legendary off roader is getting an anniversary edition. It should be mentioned 'Niva' has been dropped from the moniker beginning with the 2014 model year and now the car is simply known as the Lada 4x4. It happened to make way for the Chevrolet Niva, which was expected to get a second generation last year, but that didn’t happen. Latest reports are suggesting it will eventually arrive in 2019 and will ride on the same platform as the next-gen Dacia Duster.

As for the car pictured here, the Lada 4x4 40th Anniversary Edition will be limited to 1977 units as a nod to the model’s genesis. Some of the units are going to come with a factory-applied camouflage paint, representing a first for the model. Black enamel will adorn the metallic surfaces of the bumpers, while the wheels are going to have black accents as well. As for the other cars, these are going to be painted in beige, red, white, terracotta, or grey-blue.

AvtoVAZ is also making some changes inside where the 4x4 gets red-orange accents inside the instrument cluster, along with an 'eco-leather' steering wheel, and stainless steel sills. A bunch of labels applied both inside and out serve as a reminder it’s not a run-of-the-mill version of the immortal Niva. The limited-run model is scheduled to go on sale in June and each will be individually numbered, from 0001 to 1977.

It is believed an all-new Niva will be introduced in the fall of 2018 in three- and five-door version and with a beefier engine replacing the 83-hp 1.7-litre gasoline unit available today. The next-gen 4x4 won’t spell the end of the current model as some are saying the 40-year-old vehicle will soldier on and peacefully coexist with the new one.

A part of anniversary cars will be painted in camouflage. It is the first time for the factory. The spotted surface is created by a combination of three colors, which are light green, dark green and black. The bumpers metal surface of the camouflage cars is painted with black enamel. As for the other LADA 4x4 anniversary cars it has a body color: beige, red, white, terracotta and gray-blue. Camouflage LADA 4x4 cars are equipped with black cast wheels and the rest of the cars have two-color silver-black discs.

Special LADA 4x4 edition is emphasized with such interior elements as a bright red-orange instrument cluster, steering wheel cover made of eco-leather and sills made of stainless steel. Logo series reminds about an anniversary status. They are embroidered on rugs and put on seats upholstery. The seats upholstery is made of eco-leather with a combination of different colors, which are gray, black, beige and brown. The shades of the material are chosen in such a way to harmonize it with the body color. As for the camouflage machines, black seats with contrast stitching are provided.

An indispensable feature of the special edition is the original labels on the front fenders, tailgate and glovebox cover. Also, the unique serial number is displayed on the label from 0001 to 1977. This number means the year of LADA 4x4 production start and the number of cars in a limited series.

It is planned that LADA 4x4 anniversary edition will be available at dealers in June.