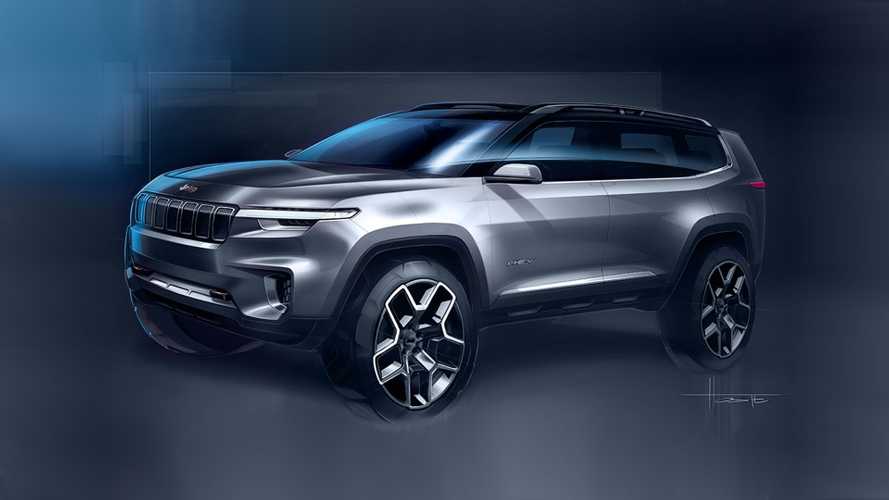 The seven-seat SUV appears to have a plug-in hybrid powertrain.

Jeep has been teasing its Shanghai-bound concept for weeks, but it’s only now we finally have some high-resolution images of the showcar. Believed to be called 'Yuntu', the three-row SUV adopts a futuristic exterior design while remaining as rugged as an SUV should be.

Up front, there’s a raked windscreen while the corporate seven-slot grille is flanked by a pair of slender LED headlights. Below sits a pair of tow hooks along with an aluminium underbody protection. The side profile is home to the familiar square wheelarches with plastic body cladding also applied onto the skirts. Sleek mirrors come to accentuate it’s a concept rather than a production model, much like the flush doors handles.

Speaking of which, the handles appear to be joined in the middle, which can only mean the Yuntu has suicide doors. Also noticeable are the chunky two-tone alloy wheels with off-road tires, as well as the relatively flat roof with a pair of black rails. The 'PHEV' lettering on the front doors indicates the concept will boast a plug-in hybrid powertrain, although technical specifications are not available at this point.

Moving to the rear, there are thin taillight clusters and a window that extends slightly towards the sides of the vehicle. Sitting between the slender aluminium exhaust tips is the aluminium underbody protection. What’s actually interesting about the Yuntu’s derrière is the fact that it appears to have a vertically split tailgate.

It is believed the concept is more than just for show as reports from China are indicating this Jeep three-row SUV will actually spawn a production model through the local GAC-Fiat joint venture.

The full reveal is scheduled for next Wednesday at Auto Shanghai 2017 and hopefully Jeep will shed some light about whether the Yuntu actually has a shot of hitting the assembly line in the foreseeable future.