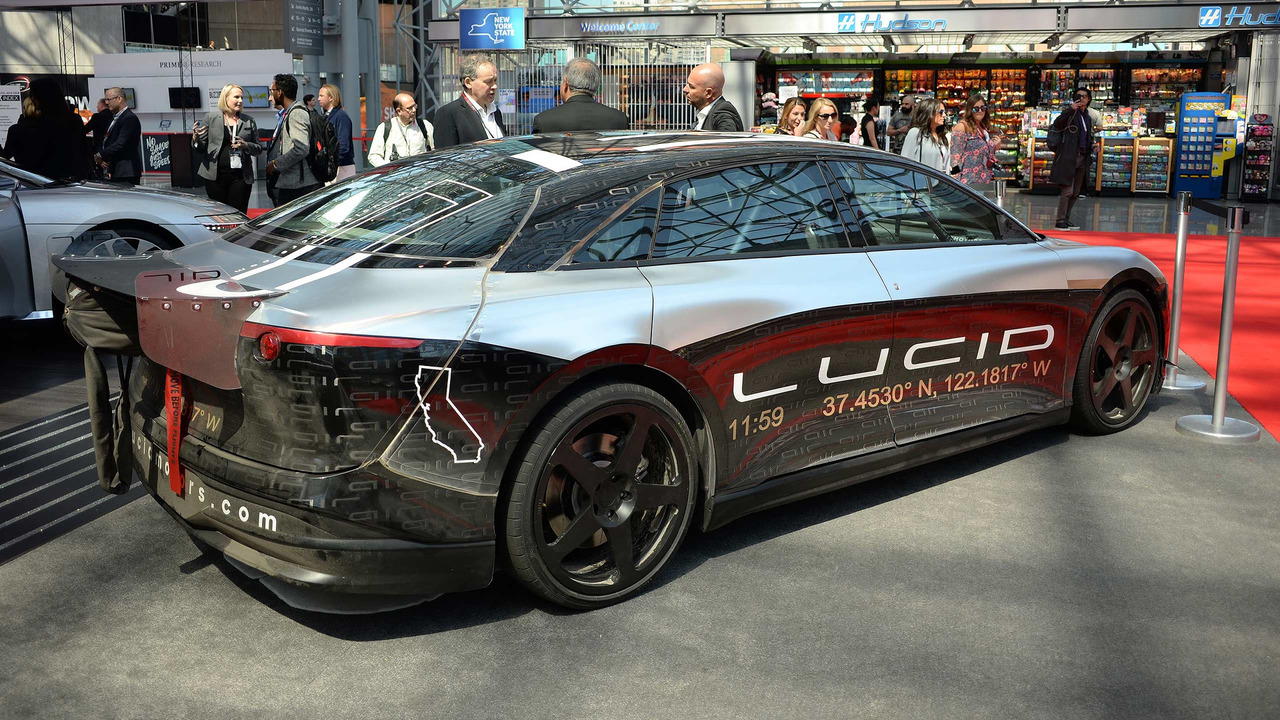 Blasts up to the 350km/h speed limiter on its first run.

Development of the 2019 Lucid Air startup luxury EV is gathering pace, with the firm finally beginning its hot weather and high-speed testing this past week. And, over at the TRC test track in Ohio last weekend, it pulled off a remarkable feat straight out of the box – reaching a 217mph top speed on its very first max-speed runs.

It probably could have gone even faster, but for the 350km/h speed limiter the firm had left active. To now celebrate this bragging-rights achievement, Lucid bosses have shipped the test car back from Ohio to go on display at the New York Auto Show – still wearing all the dirt, bugs, and brake dust it picked up during the runs.

EV testing ace and TRC veteran Roger Schroer was behind the wheel, and an engineer from Lucid told Motor1 that they were originally planning to be quite conservative. “The car isn’t yet wearing brakes specced for over 200mph, so we fitted a parachute to the rear and told Roger not to brake above 150mph. We also told him to ease off before reaching the banking, to keep the loads out of the tyres.”

Roger duly hit 217mph… and kept his foot in through the banking, averaging 215mph through the curve. “He told us it felt so planted, he wanted to push it a bit further. When we got it back to base, we checked the outside tyre temperatures: there we no spikes or hotspots.” Thank the bespoke tyres Pirelli is creating for the Lucid Air – you can check them out at NYIAS too: the firm hasn’t yet swapped them over.

All good news, and yet more evidence the Lucid Air is much more than just vapourware. During the press reveal – the firm’s first since launching to the public last December – chief technical officer Peter Rawlinson said the objective remained to create a new type of luxury car, based around a space-efficient full EV drivetrain rather than the internal combustion engine. He dismissed alternative drivetrains such as fuel cells. “The right solution is EV. It gives us interior space better than a Mercedes-Benz S-Class within an E-Class sized car – and the flexibility to design a car as stylish as a CLS-Class."

Lucid isn’t worried about Tesla, either. “We’re not a Tesla lookalike. There’s a huge luxury market out there, currently dominated by the German brands. We believe we can find our place within this.” Indeed, the desire to take on the German brands is why Lucid is so keen to promote its top speed. “It’s ultimately academic, but this is a car that will be used on the German autobahns – so we need to show our credibility.” 217mph straight out the box puts the firm on track to doing just that.