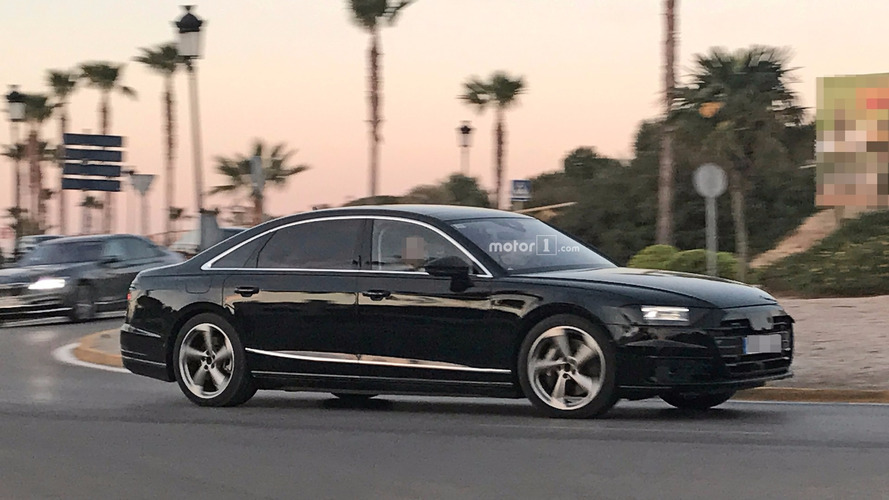 It's our best look yet at the upcoming luxury saloon.

Every week we’re inching a bit closer to the debut of the all-new Audi A8. The full-size luxury saloon will make its official debut on July 11, 2017. But before it does, the A8 can be seen almost completely uncovered in these revealing new spy photos.

Apart from some black tape around the headlights, grille, and taillights, the entire body of the new A8 is seen completely exposed. The photos were taken with an iPhone – so are thus thus of grainy quality – but show an all-new elegant look for the sporty luxury sedan.

Some new details include a Prologue-styled rear, a more hexagonal grille, new wheels, and a sleeker body profile overall, which adds to the sporty characteristics. Some details not seen in the spy photos here are the quad exhaust tips, and the simplified wheels, which we’ve seen on prototypes before it.

Performance details are still well under wraps, but the new S8 could come with the same 6.0-litre W12 off the Bentley Bentayga. In that application, it pumps out a hefty 600 horsepower and 664 pound-feet of torque – although don't expect the A8 to see the same figures.

With a new spaceframe build, the entire A8 range will tack on more than 45 kilograms to the kerb weight, but see structural rigidity improved by 24 percent. The rear seats, meanwhile, will see a 28 millimetre increase, while rear passengers will get a 14 millimetre increase in headroom.

Overall, the new A8 and following S8 promise to be the most advanced vehicles Audi has ever built. The two will make their debut in July before heading to the Frankfurt Motor Show in Germany later in the year.