Skoda To Show 'Porsche Of The East' at Techno Classica 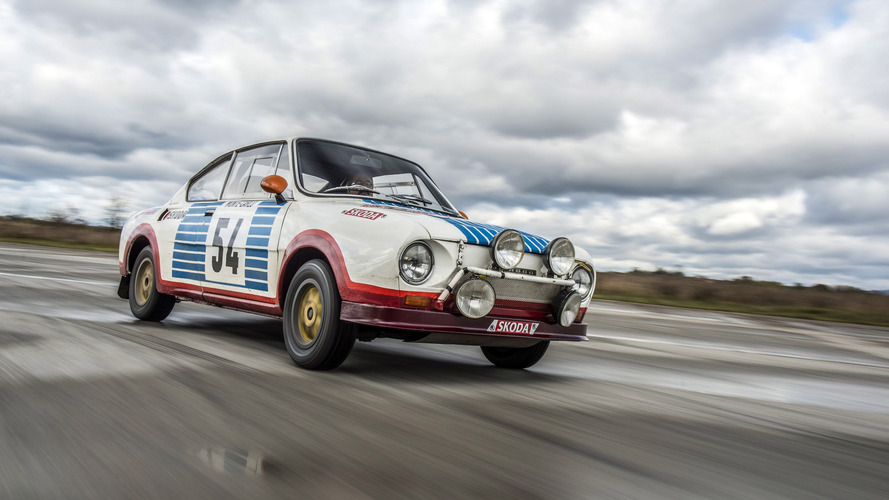 Joined by the company's first aerodynamic prototype, the sleek 935 Dynamic.

One of the oldest carmakers in the business, Skoda has been around for 122 years, so it doesn’t come as a surprise the VW-owned marque has a lot to show at the Techno Classica 2017. A very important car in the history of the Czech company would have to be the legendary 130 RS – if ever a car justified the 'Porsche of the East' tag, it's this.

Introduced in 1975, the first RS-badged car from Skoda triumphed in the 1977 Monte Carlo Rally in the 1.3-litre class with Václav Blahna and Lubislav Hlávka. Four years later, it managed to score a victory in the European Touring Car Championship, and throughout the years won multiple races in a variety of major competitions.

At the heart of the rear-wheel-drive coupe was a four-cylinder, 1.3-litre engine delivering 140 horsepower. That was enough Skoda power for a decent top speed of 137 mph.

Production of the RS 130 came to an end in 1981 and it wasn’t until almost two decades later when a new RS was born, with Skoda launching the first-gen Octavia RS in 2000 (called vRS in the UK, because of licensing issues wiht Ford...).

Also at this year’s Techno Classica, Skoda will exhibit the sleek 935 Dynamic originally unveiled at the 1935 Prague Motor Show. It was the brand’s first-ever aerodynamic prototype and it’s the only preserved car in existence today after being thoroughly restored by the company’s own restoration department.

Featuring a streamlined body, the curvaceous 935 has the flat, water-cooled boxer engine mounted in front of the rear axle, so it's technically a mid-engine car. The four-cylinder, 2.0-litre is capable of producing 55 hp channelled to the rear wheels via a semi-automatic, four-speed transmission. Thanks to this hardware combo, the teardrop-shaped car was able to reach a top speed of about 87 mph. Skoda’s engineers kept the weight down to a low 1,170 kilograms by using a combination of aluminium and steel in the vehicle’s construction.

Aside from showcasing the 130 RS and the 935 Dynamic, Skoda will also exhibit the Popular Monte Carlo in coupe and cabriolet body styles as well as the rare Rapid Dalnice of which only 110 units were ever made. Lastly, the Favorit is going to celebrate its 30th anniversary at the event and Skoda say it’s a car that “paved way for one of most fruitful partnerships in automotive history”. The company is obviously referring to the fact the Favorit was the first Skoda to benefit from Volkswagen engineering following the takeover in the early 1990s.

Mladá Boleslav, 4 April 2017 – ŠKODA looks back on impressive milestones in 122 years of corporate history at this year’s Techno Classica (5 to 9 April) in Essen. As one of the world’s oldest automotive manufacturers still producing cars, the traditional Czech brand will be focusing on three main topics at their stand in hall 7: Innovative aerodynamic prototypes testify to ŠKODA’s pioneering achievements and engineering skill. In 1977 the ŠKODA 130 RS achieved a highly acclaimed class double victory at the Rally Monte Carlo. Ten years later, the ŠKODA FAVORIT paved the way for one of the most fruitful partnerships in automotive history.

"At this year's Techno Classica, we are taking three special themes from the impressive history of ŠKODA," says Andrea Frydlová, head of the ŠKODA Museum at the headquarters in Mladá Boleslav. "One of the highlights at our stand in Hall 7 is the ŠKODA 935 Dynamic, which represents the brand’s development competence in the field of aerodynamics. It is the world’s only preserved specimen of this type and has been faithfully restored by our restoration department – even the hue corresponds to that of the original vehicle,” Frydlová added.

Since the pioneering days of the automobile, ŠKODA has been one of the frontrunners in development thanks to the engineers’ and craftsmen’s passion for technology.  The brand repeatedly built exceptional vehicles, which made a great contribution to the technical progress. One example of this is the ŠKODA 935 Dynamic; the brand’s first aerodynamic prototype was presented at the Prague Motor Show in 1935 and caused a sensation around the world with its particularly low air resistance. On show at the Techno Classica, ŠKODA will be presenting the unique model – once again in top form after an eventful history.  Also at the classic car show: the ŠKODA POPULAR Monte Carlo in coupé and convertible body variants. Both were far ahead of their time with elegant and aerodynamic bodies. The same is true of the rare ŠKODA RAPID ‘Dalnice’ of which only 110 were produced between 1938 and 1941. This is also one of the highlights at the ŠKODA stand. Its streamlined design was created in a wind tunnel – a rarity in this early phase of automobile construction. In combination with a 34 kW (46 hp) powerful four-cylinder, which draws its power from a 1.6-litre displacement, the model has a top speed of 120 km/h.

The ŠKODA 130 RS represents the brand’s motorsport passion in the 1970s. Visitors of the Techno Classic 2017 can experience an extraordinary variant of the legendary rear-wheel drive at the traditional Czech brand’s stand: the ŠKODA 130 RS A5, Type 738, was used in 1978 in numerous aerodynamic tests at the airport in Hoškovice, Czech Republic. With a large wing as well as the body widening towards the rear, the engineers achieved a higher contact pressure and thus improved handling at high speeds. This was also necessary for the streamlined prototype to reach its top speed of 250 km/h. The 140-hp (190 hp) four-cylinder rear-engine model had to be ventilated by large air inlets.

On the topic of the ŠKODA 130 RS, the ‘Porsche of the East' won the 1,300 cm3 class with the duo Václav Blahna / Lubislav Hlávka at the Monte Carlo Rally in 1977. In second place Milan Zapadlo / Jiří Motal rounded off the brand’s double victory perfectly. The predecessor of the current ŠKODA FABIA R5 wrote of the most glorious chapters in ŠKODA's 117-year engagement in motorsport. A ŠKODA 130 RS, as well as a ŠKODA FABIA R5 in the 1977 look  can be seen alongside other representatives of ŠKODA’s racing history at the classic-car event in Essen.

With the debut of the ŠKODA FAVORIT on 16 September, 1987, at the International Engineering Fair in Brno, the car manufacturer reinvented itself and set the course for an unprecedented success story. In the difficult final years of the socialist era, the compact model designed by the Italian studio Bertone used a transversely mounted front engine and front-wheel drive for the first time. The new model signalled a turning-point for the entire company: With its modern concept, it provided Volkswagen with a decisive reason for its commitment in the Czech Republic. At the Techno Classica 2017 in Essen, the FAVORIT 5-door model will stand alongside other representatives of the series: the estate model FORMAN quickly established itself as a family favourite.  With the FAVORIT F2 Rally, ŠKODA won the Rally Manufactures’ World Championship 1994 in the front-wheel drive category, while the FAVORIT saloon demonstrated the enormous diversity of the model range and the brand’s development potential.