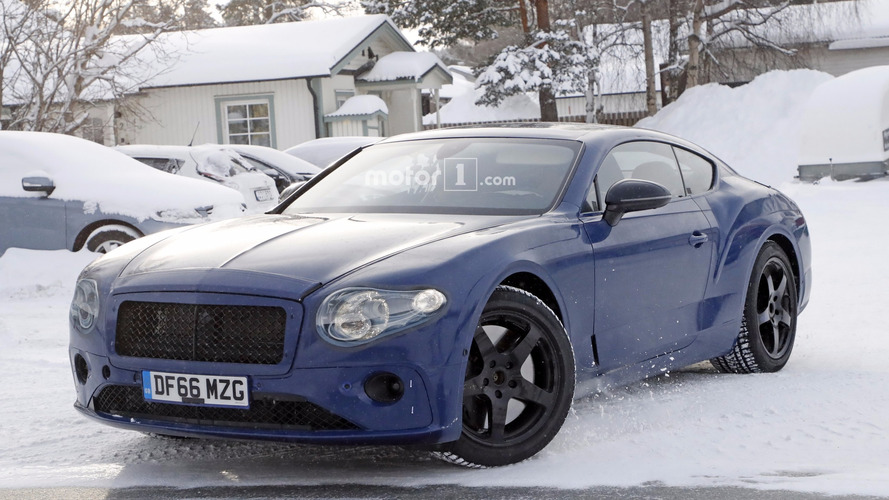 The blue prototype with body-colored extra panels was caught by the spy camera in Sweden.

It may seem almost camo-free at a first glance, but look closer and you’ll notice this blue Continental GT prototype has an extra layer of disguise on both of its front and rear bumpers. The bottom section of the bonnet along with the front bumper are also covered by a body-coloured piece of fabric, while at the back a similar type of camo was applied on the bumper to mask its real design.

Thankfully, the clear tape slapped onto the headlights and taillights by Bentley can’t hide the graphics of the coupe’s lighting clusters, which appear to be derived from those of the stunning EXP 10 Speed 6 Concept.

A quick check of the prototype’s number plate with the DVLA reveals the car is rocking an engine with a displacement of 5998cc. That means it actually has the old biturbo W12 6.0-litre version powering the outgoing model rather than the new one inside the Bentayga.

We know that because the new-gen powertrain has a capacity of 5950 cc in the plush SUV and will soon find its way in the engine bay of the all-new Audi A8 as well as the next Flying Spur recently spotted hiding underneath a Panamera. The same mill was also due to power the next-gen Volkswagen Phaeton, but the model has been pushed back until the end of the decade and it actually might go all-electric.

Getting back to the Conti GT at hand, it’s going to be an all-new model taking into account it will switch to the MSB platform shared with the latest Porsche Panamera. That will bring a more than welcome weight loss considering the range-topping Supersports version weighs a hefty 2,750kg in coupe form and a massive 2,900kg in convertible guise.

Bentley is expected to introduce the new W12-powered Continental GT at the Frankfurt Motor Show in September and after that come out with a hybrid V6 version and then the V8 model.