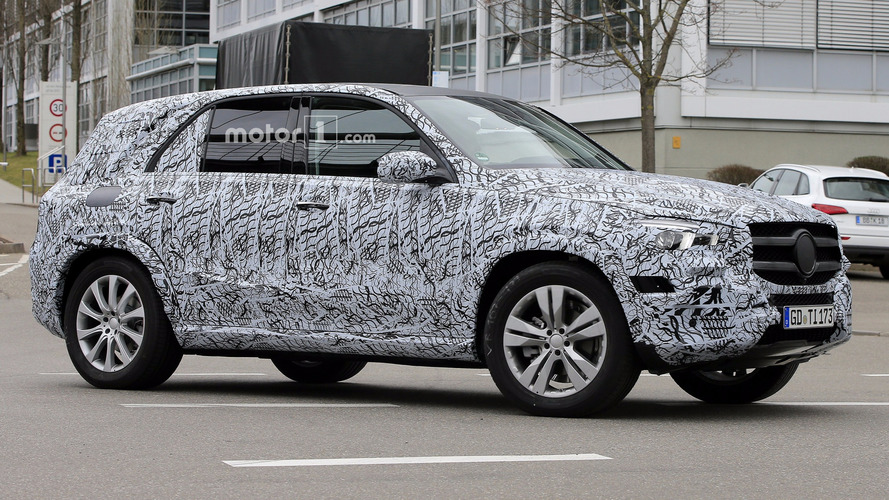 The current Mercedes-Benz GLE has been around since 2011, so is no longer the freshest face in the the midsize luxury SUV segment. Thankfully, Mercedes is hard at work preparing the next generation. It’s going to be an all-new model, too – not only will it switch to the MRA platform borrowed from the E-Class, but there are going to be some significant design changes both inside and out.

Even though this prototype is wearing an abundance of camouflage, it’s already noticeable the shape has been altered and the SUV appears to have a more rounded body, similar to the smaller GLC. At the front, the wider headlights are all-new and have double LED daytime running lights, which for some reason were only working on one of the clusters. At the back, the taillights are mostly masked by the swirly camo, but even so, you can easily see these are all-new as well.

Looking at the side profile, it seems the new GLE will have slightly shorter front and rear overhangs, while the wheelbase is going to be stretched taking into account the rear doors appear to be a tad longer than those of the current model. This should produce a more spacious interior, with most of the stretch to pay dividends in terms of legroom for rear passengers.

Despite the fact it will be bigger, the next-gen GLE won’t actually gain weight. On the contrary, the MRA architecture should come with a healthy diet for the posh SUV, which in return will boost performance and efficiency.

Speaking of performance, it wouldn’t be too far-fetched to assume Mercedes’s new pair of inline-six engines debuting next month in the S-Class facelift will trickle down onto the E-Class and its SUV counterpart, the next GLE. In the company’s range topper, the 'M 256' petrol engine will generate more than 408 horsepower and 369 pound-feet of torque. As for the 'OM 656' turbodiesel unit, it will churn in excess of 313 hp. The refreshed S-Class is also getting a new 'M 176' biturbo 4.0-litre V8 with more than 476 hp and 516 lb-ft of torque, but it’s too early to say whether the E-Class and the GLE will get it as well.

Although this Mercedes GLE prototype appears to have most of the production bits and pieces, the wraps probably won’t come off until at some point in 2018. Meanwhile, expect more revealing spy images to arrive in the months to come and hopefully some of the camo will be removed to show off perhaps the biggest piece of the design puzzle: the C and D pillars.

As for the interior, it’s easy to notice from the above spy image that it will have many things in common with the E-Class (albeit with square air vents instead of round ones). Which can only be a good thing.