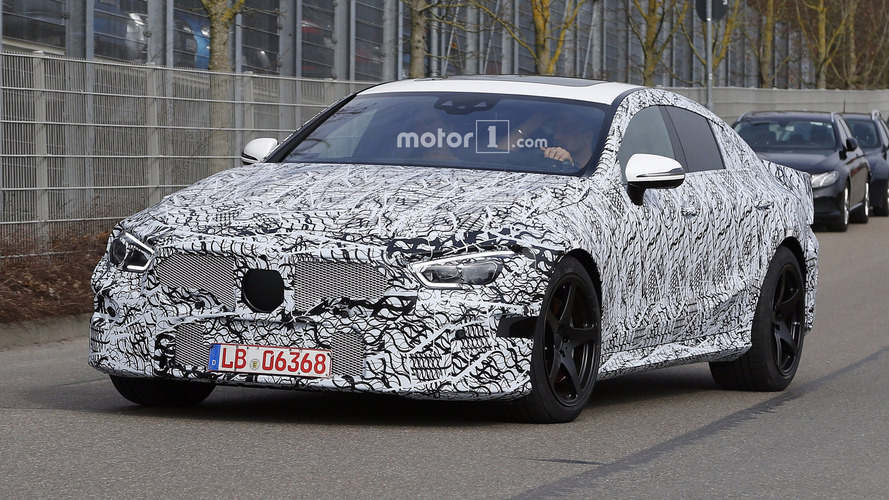 The prototype was out for Panamera blood.

Well, that didn’t take too long. It was only last week when Mercedes-AMG introduced the GT Concept in Geneva (where you can still check it out until Sunday), and already, a prototype is out on the streets for testing purposes. Not only that, but it appears to have the production body, albeit wearing an extensive amount of swirly camouflage. There’s a rather ungainly hump at the back, but thankfully that will come off when the folks from Affalterbach are ready to reveal the car in its final guise.

Set to go up against the Porsche Panamera, the new four-door sports saloon from AMG doesn’t have a name yet, or at least not one that we know of at this point (GT4, maybe?) The styling already seems to mirror the GT Concept, right down to the gold brake calipers. In addition, the headlight design appears to have many things in common with the Geneva showcar, while the wide taillights have remained pretty much faithful to those of the concept.

In regards to what will power it, our money is on AMG’s biturbo 4.0-litre V8 offered in the two-door models with different outputs. In the flagship GT R, the engine pushes out a meaty 577 horsepower and 516 pound-feet of torque. Bear in mind that’s not actually the strongest iteration of the V8 available right now either, considering the very same motor pumps out a whopping 603 hp and 627 lb-ft in the E63 S.

The sedan’s engine lineup might be topped by a hybridised version of the 4.0-litre unit, as seen in the concept. Thanks to an electric motor mounted at the back, the powertrain delivers a combined output of 805 hp and an unspecified amount of mountain-moving torque. That’s good for a 0-60 mph run in less than three seconds.

Expect the new member of the growing Mercedes-AMG GT family to see the light of day at some point in 2018; chances are, its big debut will occur after the launch of the all-new CLS.

See more images of the concept: