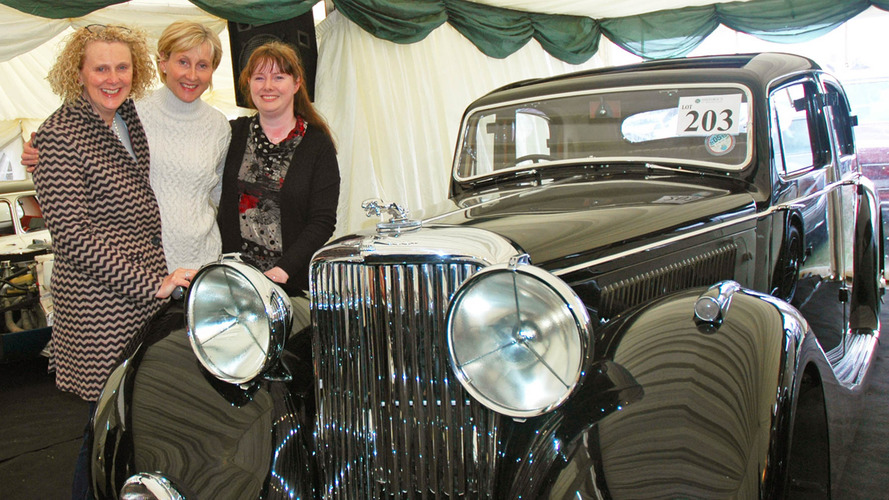 This classic Jag definitely won't end up in a museum.

Many people dream of buying back their first car, yet few can imagine the possibility of being able to purchase their grandfather’s car. But that’s exactly what happened when four family members discovered a particularly interesting Jaguar at a recent classic car auction.

The 1948 Jaguar MkIV, first owned by Arthur Whittaker, the Deputy Chairman of Jaguar Cars, has been re-united with his family 67 years after he parted with it.

In the intervening years the car was sold by Whittaker in 1950 and passed through numerous owners, before the now previous owner embarked on a restoration project in 1982 that lasted 22 years.

The fairy tale story began when Whittaker’s four granddaughters – Lucy, Sally, Sarah and Charlotte – discovered the car’s sale purely by chance a fortnight prior to it going under the hammer on the 4th March and fought off rival bidders to make it their own, settling on £70,000 for the jet black model.

And in a rather fitting end to the story, the car will return to the eldest granddaughter Lucy’s family home in Kenilworth, just miles from the former Jaguar factory in Brown’s Lane, Coventry, where it was originally manufactured 69 years ago.

Commenting on the purchase, granddaughter Sally said: “Once we discovered Grandad’s Jaguar was for sale, we just had to go and see it. We had no intention of buying it, but sitting in it before the sale brought back so many fond memories of family outings in his cars that we decided we just had to bid for it.”

Sister Lucy added: “We’d never bought a thing at auction before, but were determined to take it home if we could afford to. It was all a bit of a whirlwind and suddenly, the hammer came down and it was ours.”

Despite the car’s age and significance there’s no chance of it being parked up or moved to a museum. The granddaughters have every intention of enjoying the car, saying: “It’s just too lovely to leave locked away. The plan is to share enjoyment of the car amongst all our families, including Grandad’s seven great grandchildren. I’m sure that’s what he would have wanted too.  All we need now is the picnic hamper and a bit of sun!”