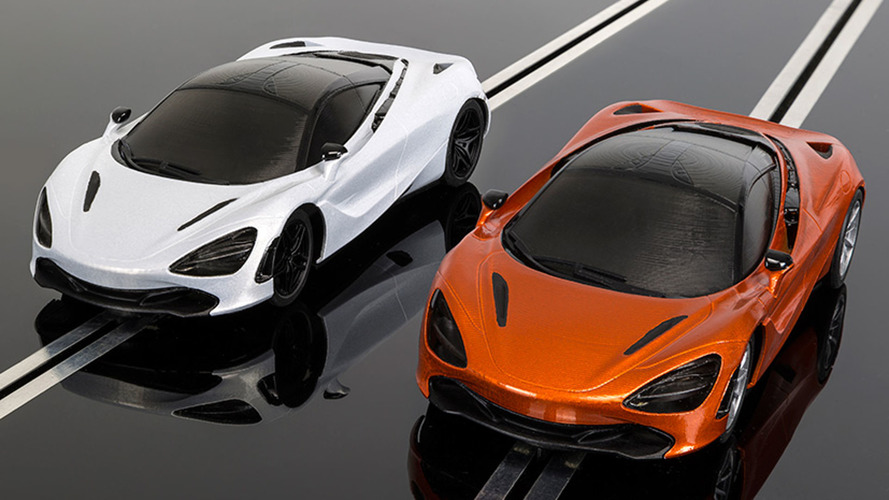 It's everything you love about the new McLaren supercar, just 32 times smaller.

You're never too old to buy toys in the world of motoring. In fact, we’ll make a rather bold statement and say that no other group embraces a youth-based genre more thoroughly and completely than that of the motoring enthusiast. Case-in-point, Amalgam’s amazing 1:8 scale collection of historic and modern McLarens that are so detailed you could probably drive one away, should you ever find yourself shrunk to 1:8 your size.

Scalextric has given us another reason to love our car collectibles and toys with the unveiling of its 1:32 scale McLaren 720S slot car. It’s faithfully recreated from McLaren’s latest supercar, and if you’re thinking that was a crazy quick turnaround considering the real deal was just revealed last week in Geneva, you’re not wrong. Scalextric worked with McLaren during the 720’s development process and was sworn to secrecy on the design, something the company said was “torture” in their release announcing the slot car version.

Scalextric takes such things very seriously. In addition to utilising numerous photo and technical assets supplied directly from McLaren, Scalextric designers visited the manufacturer’s design centre to see the in-development 720S in person. The time spent on faithfully recreating the supercar in 1:32 form seems to be well-spent; the mini McLaren is as visually striking as its full-size doppelganger. It will be available in two colours: Glacier White and Azores Orange.

The prestigious British slot car company has been around since the 1950s and is pretty much the only game in town when it comes to high-end scale racing. Over the years, Scalextric has offered an exceptional range of both modern and classic cars, featuring everything from vintage Trans Am racers and Formula 1 cars to modern exotics. The 720S joins many other McLaren slot car offerings from Scalextric, including the 12C GT3 and P1.

The 1:32 scale Scalextric McLaren 720S is available for pre-order now at a bargain £39.99, with cars arriving to buyers later this year.

STOP PRESS - McLaren 720S and Scalextric - the secret is out!

We have an incredibly exciting announcement for you in this special edition of Test Track, which may come as a big surprise. It’s something we’ve been dying to tell you for some time but we were, understandably, sworn to secrecy by our friends at McLaren. For those of you who follow motoring news, as well as slot racing, you’ll be aware that the Geneva International Motor Show opened its doors a few days ago, lifting the lid on tonnes of motoring news, including long-awaited announcements and reveals from a number of major car manufacturers.

However one announcement, and one car, stands out for us here at Scalextric (although we might be a little biased!). The McLaren 720S has been revealed to the world, ushering in the second generation of the McLaren Super Series. This highly-anticipated announcement from McLaren is joined by our own very special piece of news (you can probably see where this is going…).

We're very happy to be able to announce that Scalextric are producing a newly tooled slot car of the new McLaren 720S which will be available later this year. This slot car will join a number of other McLaren cars we’ve recently produced in 1:32 scale, with the 720S truly a testament to the close ties and fabulous working relationship we have with McLaren.

It’s been verging on torture announcing so many new cars in January, plus talking to you here in Test Track about each release, knowing this huge and fantastically exciting project was still under wraps. However, these slot cars are nothing without the real thing, and McLaren have worked with us closely throughout the confidential development process, allowing us to get this slot car out to collectors as soon as possible following the official announcement. It’s not often that such a prestigious and world-renowned automotive manufacturer allows a slot racing brand to develop a car before the real thing has been launched, so a huge thank you to McLaren.

We’re sure this news is welcome to slot racing fans around the world, especially those fond of McLaren cars, and it’s rather fitting that the last 2017 new tooling announcement can happen in such a special and rather unique way.

Before we talk about the slot car and its development from our side, we’d like to focus on the 720S itself, and what looks like an incredibly impressive supercar. Replacing the McLaren 650S, which is the first time McLaren have ever directly replaced a model in its product range, the 720S has a tough act to follow. However, with a new 4.0-litre twin-turbocharged V8 engine, upgraded brakes and bespoke Pirelli P Zero Corsa tyres, the McLaren 720S is perfectly placed to do just that.

With power, torque and throttle responses all significantly enhanced compared to the first generation Super Series (including better fuel efficiency and lower emissions) the McLaren 720S is a car the world will take notice of. But that’s not all - the 720S also boasts a new active chassis control system (allowing you to choose from Comfort, Sport or Track chassis modes), ‘Variable Drift Control’, double the aerodynamic efficiency of the McLaren 650S via an active wing, plus greater cooling efficiency to the radiators. The 720S is also 18kg lighter than its predecessor, using an ultra-lightweight, carbon fibre central structure.

If you add that up, it sounds like a pretty exciting supercar and a machine that car lovers around the globe will be interested in. For those of us who aren’t able to drive the real thing (although I can imagine quite a few owners of the car wanting a slot car too), the next best thing is undoubtedly taking it for a spin on 1:32 scale track, or even admiring it on a shelf.

Discussion on the McLaren 720S began some months ago when we started chatting with McLaren about the possibility of producing a slot car. Having worked closely with them when producing slot cars of the 12C GT3 and McLaren P1™, it made sense to both of us to do something similar with this new project. We were delighted to work with McLaren again and jumped at the opportunity to produce this exclusive car for slot racers.

Scalextric's resident designer Luke soon got to work, starting on the 720S in late September with initial design work completed towards the end of November.

Despite all the assets supplied by McLaren, a research trip was scheduled to offer Luke the chance to see the car first-hand and to get more photos of some particular areas; after all, the last thing we wanted was to get anything wrong on the car! The McLaren Technology Centre, the home of the McLaren Technology Group, is probably one of Luke’s favourite places to go and a date for a visit was arranged. Not long afterwards Luke found himself parking up outside one of the most impressive automotive facilities in the UK.

By the way, if you aren’t familiar with the McLaren Technology Centre (MTC), we definitely recommend giving it a Google. It’s an absolutely stunning building and the work that goes on there is probably what petrol heads dream about at night!

With his visit completed, and photographs saved, Luke was able to finish the project. The LED lights, which many of you will spot quickly, were a particularly interesting area to design and is probably the most unique arrangement we’ve seen here at Scalextric.

The McLaren 720S will be available in two liveries for 2017, the C3982 ‘Glacier White’ and C3895 ‘Azores Orange’. Both are now available for pre-order, either on the Scalextric website or with Scalextric retailers.

We’re delighted to have been invited to produce this incredibly special car and we hope the finished article is as well received as the real thing. To be involved at such an early stage with this project was a real privilege and to be able to release the slot car in the same year as the car itself is truly icing on the cake. Fingers crossed the fans of the world are also pleased there’s a slot car to go along with the 720S so soon after its announcement!

That just about does it for this special edition of Test Track and we hope you’re as excited as we are about the news. The McLaren 720S is an incredible car and we’re so chuffed to have been able to produce it. As with all our development news here in Test Track we’ll be sure to keep track of the 720S as it makes its way through the development journey, so be sure to check back in with us in the coming months to see how it’s going.

All of us here at Scalextric would also like to offer our thanks to McLaren for their assistance in the development of this project. As I mentioned, they kept us informed and in the loop throughout and their support was vital for us. Getting us involved so early on should ensure the release of the slot car 720S is only a matter of months behind the full-size car being unleashed, and I’m not sure whether we’ve ever been able to supply a slot car that quickly before - many thanks.

We hope you join in with the discussion, not only with the McLaren 720S itself (#McLaren) but also with this edition of Test Track (#TestTrack) on Twitter. If that’s not your thing, you can bet there’s a lot to talk about on Facebook or you can kick things off on the Test Track Forum.

For any new readers that are joining us for this announcement, a new edition of Test Track is published on the Scalextric website on the last Friday of every month, but should there be any breaking news, we’ll get it to you straight away in these kinds of ‘Stop Press’ editions. We hope you’ll join us again and until next time,