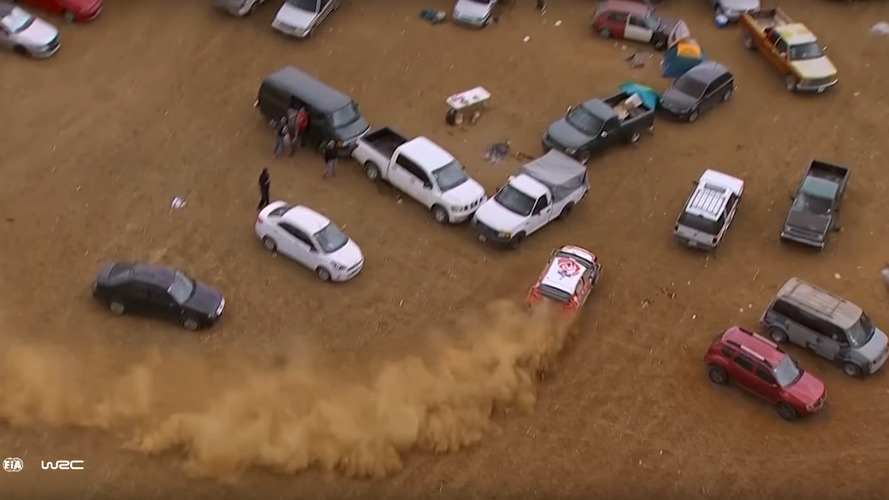 Survives to give Citroen its first WRC victory of the year.

Citroen WRC driver Kris Meeke won this weekend's Rally Mexico despite the most bizarre incident on the final stage. The Northern Irishman had built up a gap of over 40s - but that looked to be in jeopardy when he went off the road during the Power Stage. He had to manoeuvre past parked cars before getting back on the road to claim the win in the most dramatic of finishes.

Such was his shock, Meeke couldn’t climb onto the roof of the car at the end of the stage to celebrate, and had to be helped by co-driver Paul Nagle.

Meeke was only eighth after Thursday’s opening super special, but took the lead as soon as the action, curtailed by the cancellation of two stages in the morning, was underway on Friday. While M-Sport, Hyundai and Toyota all struggled on the opening day’s action with varying powerplant issues, Meeke sailed through relatively unscathed.

A spin at a key moment for a second consecutive event meant Sebastien Ogier couldn’t challenge for the victory. The Frenchman spun on Saturday afternoon when the lead margin had been just over 20s. His mistake cost him another 10s and the lead fight was over, but he held on to second to retake the championship lead and extend M-Sport’s lead in the manufacturers standings.

Thierry Neuville was left reeling from the fuel filter issue that plagued Friday, but at least made it to Sunday unscathed for the first time this year, having crashed on Saturday on the first two rounds. He took third and five points for winning the Power Stage.

Ott Tanak finished outside of the podium for the first time in 2017. He headed Hayden Paddon who, like Tanak, had dispatched the Toyota of Juho Hanninen on Saturday afternoon.

Jari-Matti Latvala took sixth, losing over two minutes due to having to sweep the road with engine troubles on Friday and also eventually the championship lead.

Latvala’s Toyota teammate Juho Hanninen took seventh despite suffering from illness all weekend, with Dani Sordo taking eighth. The Spaniard had a rollercoaster event. He suffered the fuel filter issues which plagued his team-mates, but was also given a 10-minute penalty for not finishing Friday’s super special which was later overturned.

Elfyn Evans took ninth, competing on the event with a five-minute penalty for a pre-event engine change. However, the Welshman did score another fastest stage time in his DMACK-run M-Sport Fiesta.

The titanic battle for WRC2 honours was decided on the penultimate stage as M-Sport and Skoda works drivers Eric Camilli and Pontus Tidemand duelled for the win respectively.

Camilli had unseated the Rally Sweden winner on Saturday after taking chunks of time, including 20s alone on the first stage of the morning.

However on the penultimate stage of the day Tidemand took the lead back with a rapid time, combined with Camilli gambling on a wet set-up for rain which never arrived. The Swede secured 10th overall and the win.