VW Arteon can now be ordered in Germany 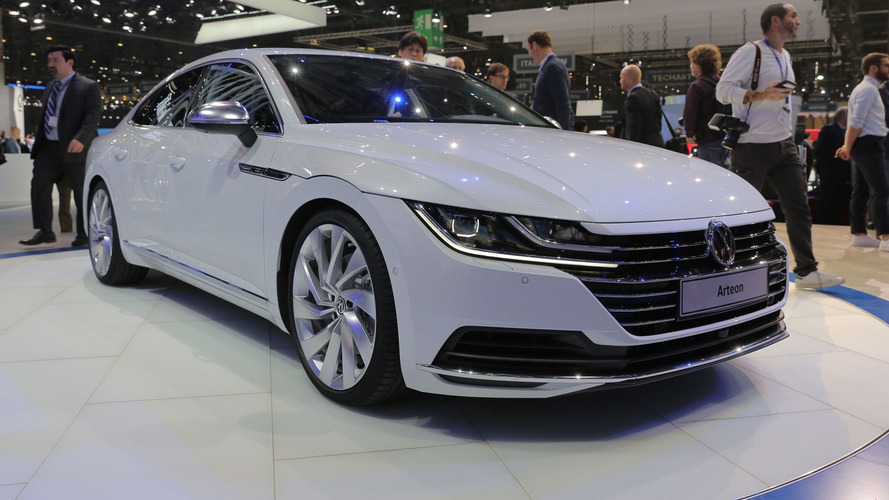 Well, that didn’t take too long. Following its world debut a couple of days ago at the 2017 Geneva Motor Show, the Volkswagen Arteon is now available for ordering at home in Germany. Bear in mind Wolfsburg’s range-topping model can be had for the moment only with the strongest engines: the 2.0 TSI with 280hp and 258lb ft and the torquetastic biturbo 2.0 TDI with 240hp and 369 lb-ft. Both of them are hooked up to a dual-clutch automatic transmission sending power to a 4Motion all-wheel-drive system.

For the premium VW is asking over the Passat, the Arteon proposes a considerably sleeker body with a more practical rear hatch providing access to the 563-litre boot with the rear seats in place. Folding them will boost the cargo capacity to a generous 1,557 litres. As it’s the case with the saloon, the new fastback comes with an all-digital instrument cluster, a head-up display, plus VW’s new 9.2-inch infotainment system with support for gesture control available also in the Golf facelift. Another ace up the Arteon’s sleeve is the longer wheelbase granting superior legroom.

Buyers willing to spice up their cars will be able to select from Elegance and R-Line versions and a vast array of optional kit, such as a heated steering wheel, front massaging seats, two-tone Nappa leather upholstery, three-zone automatic air conditioning, and a panoramic sunroof.

Set to be produced in Germany at the Emden plant, the new Arteon will be in the hands of customers in its domestic market beginning with mid-June. We should point out the new arrival in VW’s lineup will only be a temporary flagship considering a second-gen Phaeton is expected to arrive around the end of the decade. It was supposed to come out sooner than that, but then Dieselgate happened…

Prices in the UK are yet to be confirmed, but are rumoured to start at around £30,000.

Read more about the VW Arteon:

Pre-sales have started:
The new Arteon can now be ordered

Just two days after its world premiere at the Geneva International Motor Show, pre-sales of the new Arteon start today in Germany. Available to order and configure at launch are the two most powerful petrol and diesel engines – a TSI delivering 206 kW / 280 PS and a TDI biturbo producing 176 kW / 240 PS. Both top versions are supplied as standard with a dual clutch gearbox (DSG) and 4Motion all-wheel drive.

The new Arteon is set to thrill customers with its combination of emotional design, sporty charisma, great flexibility and generous space. Further aspects that would be considered plus points in any vehicle class include excellent rear legroom and luggage space of 563 to 1,557 litres. On the purely technical side, the new Volkswagen scores with front-wheel and all-wheel drive, plus digitalised displays and controls. Further features include an Active Info Display (fully digital and programmable instruments), a head-up display and the new Discover Pro infotainment system with a 9.2-inch glass screen and gesture control.

The Arteon's innovative driver assistance and convenience systems match its overall concept. Three of its new technologies illustrate this. The latest generation of Adaptive Cruise Control (ACC) now takes into account speed limits and route information and automatically adjusts driving speed accordingly. Thanks to the navigation system's GPS and road data, the new dynamic cornering lights with predictive beam control anticipate when a bend is approaching and illuminate it before the driver actively turns into the bend. The second generation of Emergency Assist offers more safety: if the driver becomes incapacitated for health reasons, the system not only slows the car down within system limits, but now also steers it into the slow lane, traffic behind permitting.

Along with the high-quality base version, the gran turismo will be available in two exclusive equipment lines: the 'Elegance' and 'R-Line'. The standard configuration of the Arteon Elegance is focused heavily on a cultivated look. The Arteon R-Line, meanwhile, puts sportiness even more at the heart of the vehicle's configuration – as is typical of all Volkswagen R-Line models. Based on the different orientations of these three equipment lines, the fastback model can be extensively personalised. The range of optional equipment includes features such as a panoramic tilt/slide sunroof, three-zone automatic air conditioning (Air Care Climatronic including air quality sensor and allergen filter), massage seats in front, heated steering wheel and two-tone nappa leather interior.