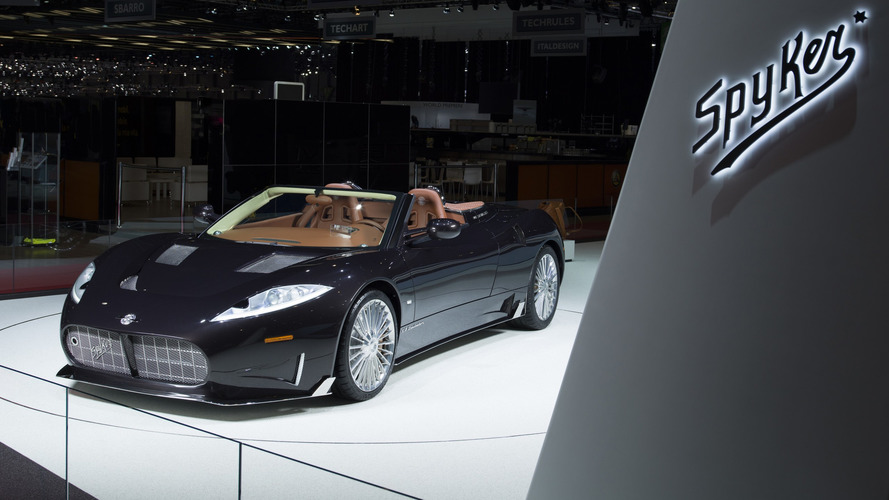 Spyker teased its open-top C8 Preliator Spyder last week, but the Dutch carmaker caught us all by surprise, introducing not only the vehicle, but also a major technology agreement at the 87th Geneva Motor Show. The speciality marque announced it will be replacing its old V8 Audi-sourced engines with new motors – normally-aspirated, Koenigsegg dry-sump 5.0-litre V8 engines with 600hp and 443lb ft of torque.

The Swedish supercar company has worked on the engine specifically to “meet Spyker’s needs.” It will be installed in every new Spyker C8 Preliator, both in Coupe and Spyder forms. The unit will be mated exclusively to a six-speed manual gearbox and the carmaker says this decision follows the desire of its “discerning clients,” who have “clearly spoken out in favour of the manual.”

"This is our single most important advancement in technology since I founded Spyker in 2000,” Victor R. Muller, Spyker’s Founder and CEO, commented. “I have always admired the amazing technologies developed by Christian von Koenigsegg and his dedicated team creating one of the most sophisticated cars and engines on the planet, and I am convinced our Spyker C8 Preliator clients will tremendously enjoy the huge performance leap.”

Finished in Ascot Bronze, the C8 Preliator Spyder is making its debut featuring an automatic soft top and a cream leather interior with honeycomb contrasted stitching. It based on a redesigned all-aluminium space frame composed of extrusions and folded sheet aluminium and extruded aluminium side-impact bars and integral rollover bars. The cabrio is longer than its predecessors, thus providing more legroom in the cabin.

The new Koenigsegg-sourced engine propels the 1,390kg Spyder from a standstill to 62mph in 3.6 seconds and gives it a top speed of 201mph. Stopping power is provided by 350mm front and 322mm rear vented and cross-drilled disc brakes.

With this model, the company is also introducing an advanced head-up display, which can control different applications, including Spotify and Apple Music, with “simple, memorable hand gestures.”

The Dutch company says it will produce no more than 100 examples of the super roadster, each wearing a starting price of around £300,000, excluding options and any taxes.

Check out the press release section below for complete technical details.

Geneva, 7 March 2017 - Spyker Ltd. (“Spyker”) today announced its most significant technological advancement since the inception of the Dutch creator of meticulously hand-built sportscars in 2000. Spyker Founder and CEO Victor R. Muller announced that Spyker has signed an Engine Supply Agreement with Christian von Koenigsegg, Founder and CEO of Koenigsegg Automotive AB (“Koenigsegg”) from Angelholm, Sweden, during a press conference at the 87th Geneva International Motor Show. Both the Spyker C8 Preliator as well as its Spyder version, which was unveiled at the press conference, will be propelled by the new Koenigsegg engine.

The normally-aspirated, Koenigsegg dry-sump 5-litre V8 engine boasts 600 hp and 600 NM of torque. Koenigsegg has developed this engine specifically to meet Spyker’s needs and the Koenigsegg V8 will be installed in every Spyker C8 Preliator, both the Coupe, which was launched in March 2016, and the new Spyder unveiled today, and replace the Audi V8 powertrain as from car one. The Koenigsegg engine will be mated to a six-speed manual transmission.

The announcement was made on the occasion of the global debut of the Spyder version of Spyker’s C8 Preliator, launched here in Geneva exactly a year ago. Spyker translated its timeless aviation inspired design to the ultimate convertible, culminating in the Preliator Spyder. The design reflects the progress made with the Preliator from concept towards a production car. The Spyder, in Ascot Bronze, on display at the Geneva International Motor Show features an automatic soft top and a saddle Litano leather interior with honeycomb contrasted stitching.

Spyker’s production of the C8 Preliator Spyder will be limited to 100 units only.

Victor R. Muller, Spyker’s Founder and Chief Executive Officer, said on the occasion: "This is our single most important advancement in technology since I founded Spyker in 2000. I have always admired the amazing technologies developed by Christian von Koenigsegg and his dedicated team creating one of the most sophisticated cars and engines on the planet, and I am convinced our Spyker C8 Preliator clients will tremendously enjoy the huge performance leap.

The 600 horsepower V8 engine with manual gearbox, ticks all the boxes of the Spyker brand; it's Bold, Pure, and Engaging but foremost hyper-exclusive hence a perfect match to the Spyker C8 Preliator coupe as well as the Spyder we unveil this morning. In fact, this is the only 600 horsepower series produced sports car available with a manual gearbox on the market today. Although our peers believe the manual is virtually dead, and many have vowed we would never see them again, our discerning clients have clearly spoken out in favour of the manual: the Koenigsegg powered Spyker C8 Preliator Spyder will provide an engaging purist driving experience second to none tantalising all senses. The howling sound of this normally aspirated engine will be unmistakable and thrilling.

The “Preliator” name, which means "fighter" or “warrior” in Latin, pays tribute to Spyker aviation heritage: "Fighters" are warplanes as made by Spyker between 1914 and 1918. But even more so, “Preliator” symbolises the battles Spyker faced and won in the past.The Spyker C8 Preliator Spyder, of which we will make a mere 100 units and production will start by summer 2018, is made for discerning owners who appreciate our attention to detail and the bespoke features we have offered them for over a decade and a half now. Our dedicated crew will assemble the cars in Coventry, UK, together with CPP Metalcraft, our very first partner since we started Spyker back in 2000, as of the last quarter of this year. All Preliators will feature carbon fibre bodies.

When I designed the Spyker C8 Preliator Spyder I wanted it to ooze the sheer tenacity and determination with which we created a new dawn for our company and by launching it here today we pay homage to the Latin axiom which has adorned the Spyker propellor logo since 1914 “Nulla tenacia invia est via” - for the tenacious no road is impassable”.

Christian von Koenigsegg, Founder and Chief Executive Officer: “I have known Victor and Spyker for way over a decade, and we obviously share the passion for handcrafted and bespoke automobiles. I have always admired Spyker’s tenacity and their commitment to building one-of-a-kind cars that stay true to a well-honed ethos and always been impressed by their amazing craftsmanship and beauty. The attention to detail is amazing. Spyker cars have always been bespoke in every aspect apart from their drivetrain. Therefore it gives us great pleasure to work with Spyker to design and produce an engine specifically for them that will suit the handcrafted, luxurious and high-performance nature of all Spyker cars. In terms of performance the introduction of our light, responsive and powerful engine will transform the driving experience of the Preliator.”