Abandoned for almost 20 years of its life, a sorry-looking Jaguar E-Type will see the light of day at the Practical Classic Show auction in April. Stored in a barn, this early example of Jaguar’s famous sports car has already been given a sale estimate of  between £38,000 and £44,000.

The story behind the car has revealed that it was bought new by its first owner on April 4 1962, and registered in Birmingham. Not that you’d know it now but the car was originally finished in Dark Opalescent Blue with Black trim. And, according to its history, was proudly driven and owned for some 35 years by its first keeper.

November 1 1997 saw the car change hands to its second owner. Staying within the West Midlands area, the E-Type was put into storage in a barn in preparation for remedial works. Plans to work on the car were never realised as the owner moved to the north of England, leaving the car untouched for almost 20 years in the care of his brother. 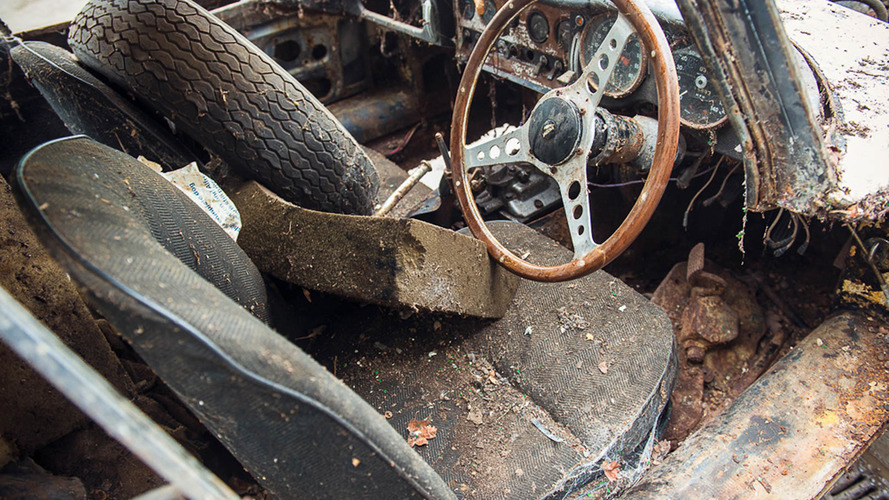 Following its barn discovery, an inspection has revealed the car to be in original condition, complete with its original and rare braking system. The worn paintwork reveals a colour change to white with the original blue showing through in some areas, as well as evidence of a replacement bonnet in red. And despite missing some glass and the radiator, most of the car is original including the steering wheel and dashboard.

Commenting on the discovery, Harry Whale, classic car consigner at Classic Car Auctions, said: “These very early E-Types are now highly collectable these days and this example will be a serious project, but one that could be very worthwhile.

“Last year the Jaguar E-Type Series I experienced very significant growth on the classic car market and we expect buyers to be queuing up for the chance to own an example just like, ready to give it the TLC it deserves.”

More classic cars up for auction: