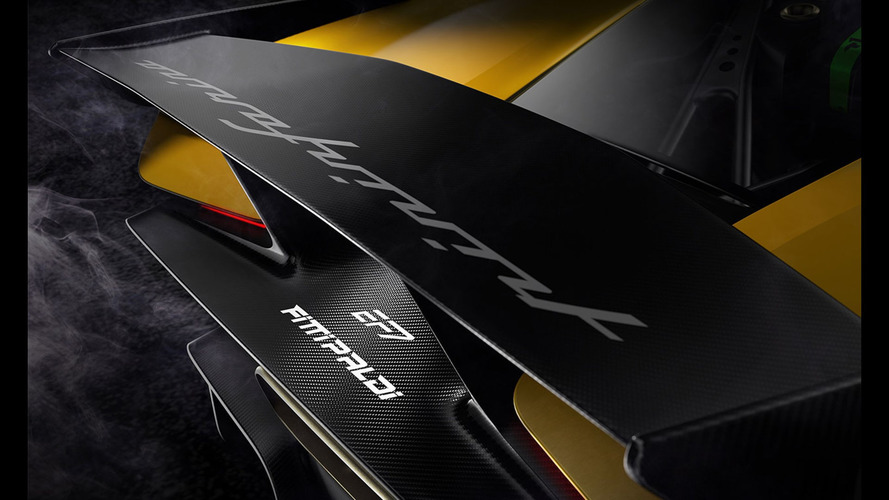 Pure track car will use a naturally aspirated V8 engine wrapped in a lightweight body.

The Fittipaldi EF7 Vision Gran Turismo by Pininfarina is inching closer to its world debut on March 7th at the Geneva Motor Show and today we are able to have a better look at the huge rear wing created to maximise aero. It was partially revealed in the first teaser, and now we can observe it will have a menacing bare carbon design with a white 'Pininfarina' script on top and 'EF7 Fittipaldi' lettering at its base.

None other than two-time Formula 1 world champion and Indianapolis 500 winner Emerson Fittipaldi will help Pininfarina reveal the EF7 in full at the 2017 Geneva Motor Show in a week from today, ensuring it's an event not to be missed.

A naturally aspirated V8 custom-created for the EF7 will reside in the engine bay and is going to pack more than 600 horsepower channeled to the road via a bespoke transmission. Thanks to an extensive use of carbon fibre, the high-performance model will tip the scales at a scant 1,000 kilograms.

With so much power and a very low weight, expect mind-blowing performance from the EF7, which has been created in collaboration with German engineering group HWA, an AMG spin-off. Only a few will be able to buy one since production will be very limited, but we can at least take comfort from knowing the race car will be available in the Gran Turismo video game on the Sony PlayStation console.

At the same event in Switzerland, Pininfarina will also introduce the rather promising H600 concept. It's going to take the shape of an eco-friendly luxury sedan with a high-tech interior cabin and an intriguing “new energy propulsion”. Quite the contrast to the Fittipaldi EF7 Vision Gran Turismo, then.

We will have live images of both straight from the Geneva floor, so check back to see the two in the metal.