Beef up your Audi R8 with a bodykit by Vorsteiner

Just three new pieces is all this kit needs to give the R8 a more aggressive appearance.

The Audi R8 comes straight from the factory as an already pretty standout supercar, and Audi Exclusive’s lineup of options, like custom etching for the carbon fibre on the side blades, add further opportunities for buyers to personalise their new ride. However, for those who want an even wilder looking machine, enter Vorsteiner’s aggressive VRS Aero Program.

The tuner’s bodykit overhauls the R8’s front and rear. At the nose, a new spoiler adds a metallic-finished accent to the bottom of the car. This one also doesn’t have a front number plate, which accentuates the massive grille. A significantly larger diffuser and wing punctuate the tuned R8’s rump, ensuring the pieces are sure to grab attention from other drivers on the road. Vorsteiner further shows off these parts by putting a massive set of its wheels on this R8, and the satin-effect paint looks great under the studio lights here. 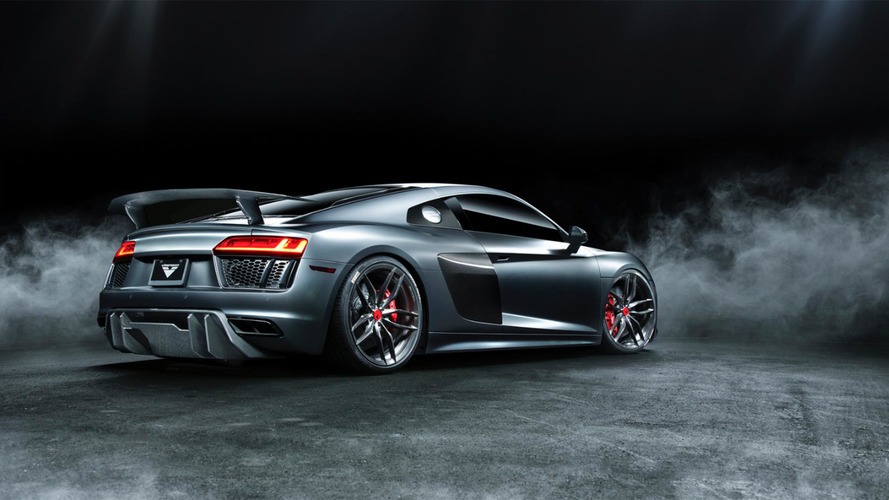 Vorsteiner makes these components from carbon fibre, and they attach to the factory mounting points, which should make installation easy. The new front spoiler, rear diffuser, and wing cost respectively £2,200, £2,650, and £2,300.

The second-generation R8 is currently available with tunes of a 5.2-liter V10, but numerous rumours indicate that Audi wants to take the supercar down market by installing a smaller motor in the engine bay. The powerplant would reportedly be a version of the biturbo 2.9-litre V6 currently available in the Porsche Panamera. However, the next-gen Audi RS4 allegedly uses the same engine, but tweaks take the output to 450 horsepower and 442 pound-feet – ­ versus 440 hp and 406 lb-ft in the Porsche. Not only would this version likely have a lower base price, but the smaller displacement would mean lower taxes in some markets. A purported product timeline indicates the entry-level version of the R8 could arrive sometime in 2018.